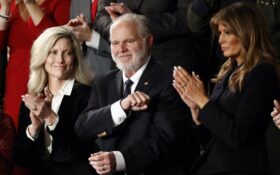 Three weeks after he passed after his long battle with lung cancer, a “shocking” detail in Limbaugh’s death certificate was uncovered by TMZ.

On the conservative activist’s death certificate, Limbaugh’s occupation was described in a way that delighted his fans… and undoubtedly annoyed his liberal critics one last time.

Rush Limbaugh is the GOAT (greatest of all time) when it comes to radio hosts, and if you don’t believe that … just read his death certificate.

According to the document, obtained by TMZ, the conservative firebrand host’s occupation is right there in black and white — ‘GREATEST RADIO HOST OF ALL TIME.’

Limbaugh was buried in a private cemetery in St. Louis in a small, private ceremony.

Limbaugh’s widow, Kathryn, and his family said additional celebrations of Limbaugh’s life are planned in the future, both virtually and in his hometown of Cape Girardeau, Missouri, The Southeast Missourian reported.

Limbaugh died Feb. 17, a year after announcing he had lung cancer.

The fiery Limbaugh was a leading voice of the Republican Party and conservative movement for decades with a daily radio show that was broadcast on more than 600 U.S. stations for more than 30 years.