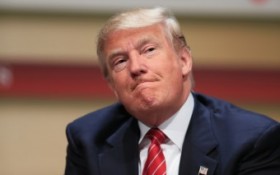 Republican presidential candidate Donald Trump has long dominated the headlines and the polls. But two new polls show his once commanding lead in Iowa has slipped away and he may be trailing Texas Senator Ted Cruz.

One poll released by Fox News and another by Monmouth University claim Cruz has taken the lead position among likely voters just weeks before the Iowa caucuses. Fox News has Cruz ahead by 3 points in Iowa, where Monmouth pollsters say the lead is closer to 5 points.

The news has gotten Trump’s attention, and over the weekend he finally unleashed a verbal assault on Cruz, a rival he had so far spared.

At a town hall event in Iowa Friday evening, Trump accused the Texas senator of being beholden to big oil companies because Cruz opposes ethanol subsidies, which are deeply popular in Iowa.

“He’s a nice guy. I mean, everything I say he agrees with me, no matter what I say,” Trump began. “But with the ethanol, really, he’s got to come a long way.”

He added: “If Ted Cruz is against ethanol, how does he win in Iowa? Because that’s very anti-Iowa.”

Trump also appeared to take a veiled shot at Cruz’s family background, suggesting Cruz might have trouble appealing to the state’s evangelical voters. “I do like Ted Cruz, but not a lot of evangelicals come out of Cuba,” he said of the country where Cruz’s father, an evangelical preacher, was born.

The attacks came after The New York Times reported that Cruz had questioned Trump’s judgment at a closed-door fundraiser, straining the rare detente between two of the race’s most outspoken candidates. Trump has gone after his other opponents gleefully and viciously, panning Jeb Bush as low-energy, Ben Carson as “pathological” and Marco Rubio as a lightweight who drinks too much water.

But the billionaire businessman had refrained from attacking Cruz, even as the Texas senator has surged in opinion polls, becoming Trump’s most serious challenger in early-voting Iowa.

Several attendees at Trump’s town hall event said in interviews before he spoke that they were torn between supporting Trump and Cruz, underscoring the risks each man faces going after the other too strongly.

Indeed, Trump was relatively reserved in his criticism, repeatedly telling the crowd he liked Cruz.

Asked at one point whether he would consider selecting Cruz as his running mate or nominating him to the Supreme Court, Trump was receptive.

“I would say that we would certainly have things in mind for Ted,” he said.