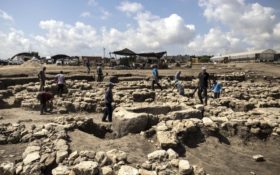 Could a recent flood be a sign that an ancient Biblical prophecy is being fulfilled?

It all started when record-breaking rain fell over Jerusalem, which caused flash floods across Israel.

Many onlookers marveled at the muddy water flowing down the mountain and across roads — and experts were stunned.

The flooding carved a path to the Dead Sea that witnesses say is a biblical prophecy fulfilled.

Breaking Israel News cited a few biblical passages that could explain this stunning possibility, noting that the Bible’s Old Testament predicted that water will flow east from Jerusalem to the Dead Sea, which would then be refilled with an abundance of life.

‘”These waters issue forth toward the eastern region and shall go down into the Arabah.'” — the Arabah is the basin nearby the Dead Sea. “… and when they shall enter into the sea of the putrid waters the waters shall be healed.

Based on the topography of Israel, and the Dead Sea, regular flooding could result in an ecological shift.

Jerusalem is atop a mountain at nearly 2,500 feet above sea level, compared to the Dead Sea, which is the lowest body of water on earth — nearly 1,500 feet below sea level. The Dead Sea is named because of it’s high salt content.

Torrential downpours, like the one Israel recently experienced, can enable fresh water to flow from Jerusalem and into the Dead Sea.

Residents of the area will be watchful as to whether or not the Dead Sea blooms with abundant life again, as it once did in the days before the destruction of the sinful cities Sodom and Gomorrah.

Breaking Israel News cited Genesis 13:10 to explain a prophetic vision that could occur.

“And Lot lifted up his eyes, and beheld all the plain of the Jordan, that it was well watered everywhere, before Hashem destroyed Sdom and Gomorrah, like the garden of Hashem.” (Genesis 13:10)

You can view several videos of the flooding below: