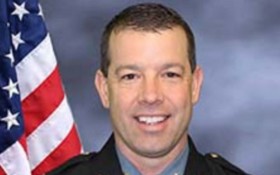 On Feb. 10th, a man shot a sheriff’s deputy in the head inside a crowded restaurant at lunchtime and slayed another deputy during a shootout at a shopping center in Maryland.

These fallen heroes represent two of the eight police officers killed in the line of duty over an eight-day span — and police have become furious that President Barack Obama has remained totally silent on the issue.

Having had enough, one Maryland sheriff wrote a scathing open letter criticizing the president’s non-response, and according to the Washington Examiner the letter is a “rallying cry among cops that the president is ignoring attacks on them, and even fostering anti-police feelings.”

You can read a transcript of the letter below:

A Letter from me to our president:

In case you haven’t heard, eight American police officers over the past eight days have been killed in the line of duty. Two of these police officers were Harford County Sheriff’s Deputies that were gunned down at a Panera Restaurant just 50 miles from where you live. I’ve watched and listened intently for words of encouragement and sorrow to come from you, but haven’t heard or seen anything.

Conversely, just two weeks ago my governor, Larry Hogan, spent the better part of a week placing a call each day to one of my deputies that was involved in a severe traffic collision in Carroll County. He wasn’t satisfied with speaking to me in order to send his prayers and regards; he called every day after the collision until he spoke with my deputy’s wife. Governor Hogan also drove to Harford County the day after two deputies were slain to meet Sheriff Gahler and the men & women of his office to grieve with them. The governor is in the middle of the 2016 Legislative Session and is pretty busy, yet found time to call, visit and pay his respects to me & my deputy, and the men & women of the Harford County Sheriff’s Office.

I understand that you are a busy man and are being pulled in multiple directions every day of the week. But, when my president doesn’t take the time to openly recognize the sacrifices that brave men & women of law enforcement make each day to keep domestic peace, I’m disappointed! I suspect that if these same deputies walked in to a restaurant, and without provocation shot and killed an innocent man, you and your staff would quickly whisk their family away to Washington for a future speech to make an example of police officers nationwide.

For me Mr. President, it has nothing to do with Republican or Democrat; black or white, male or female; but, it has everything to do with leading or following. I’m not shocked that you haven’t openly reached out or acknowledged publically the recent rash of deaths in law enforcement, but I’m tremendously disappointed!

Mr. President, your silence about these events SPEAKS VOLUMES!!!!

PS: I’ll be standing outside in the cold next week with my deputies for the funerals of the Harford Co deputies; I’ll save you a spot next to me!