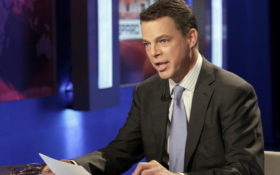 Former Fox News daytime anchor Shepard Smith once had his own show on the biggest network in cable television.

Now, he’s seeing a much different side of the business.

His new show on CNBC launched in late September to just 373,000 viewers on its first evening in the primetime news slot of 7 p.m., according to Variety.

Worse yet, he had just 56,000 viewers in the 25-54 demographic that drives advertising.

And it only got worse from there as viewers defected en masse with each day the show was on the air.

Mediaite reports that his ratings in week two plunged to an average of 268,000 viewers per night… down to 254,000 in its third week… and continued to sink into the following week.

To put Smith’s numbers into perspective, his old network aired “The Story with Martha MacCallum” at the same hour, which typically averages 2.7 million viewers per night… while MSNBC’s Joy Reid’s “The ReidOut” usually has 1.7 million.

CNN, mired in its own ratings slump, averages 1.5 million viewers at 7 p.m. with “Erin Burnett OutFront.”

Even a repeat of “Lou Dobbs Tonight” on Fox Business gets more viewers at 305,000 – and, again, that’s the repeat of the show (it airs live two hours earlier).

Perhaps the ultimate indignity came on Election Day, the biggest day of the year in news and a showcase for a news division’s on-air talent.

His old network had five of the top 10 shows on cable that day… and news programs made up all of the top 50 shows in the cable rankings. Even the little-watched MSNBC mid-morning lineup joined the party.

But Smith didn’t crack the top 50.

That’s quite the fall for the man who likely would’ve been one of the lead anchors of the top-rated Fox News coverage had he remained at the network, where he had been since its launch in 1996.

Over the years, he became one of Fox’s marquee names – and with a salary to match at a reported $15 million a year, despite hosting one of the lower-rated shows.

That daytime news show was marked by constant sniping at President Donald Trump, which gave him viral video fame among the left on social media (and endlessly frustrated the Fox News viewership).

But CNN reported he wasn’t happy with the pro-Trump atmosphere at Fox News.

“I think it probably just got to be too much,” an unnamed source told the rival network last year.

He quit in the middle of a lush contract – and while his show had some of the lowest ratings at Fox, he still pulled in an average of about 1.3 million viewers per day.

That’s up to five times his current audience.

But despite the disappointing start, CNBC says they’re happy… even if it sounds like they’re also making excuses.

“Not only is CNBC a new entrant in the general news genre, but news viewers are creatures of habit and it takes a long time to change those habits,” the network said in a statement.

Smith also insisted he was sticking with it.

“It’s not an easy thing to start from scratch,” he told the Associated Press. “There’s no muscle memory at CNBC in terms of doing a general newscast. We’re creating all of that. And that’s fun. It was fun creating in 1996, and it’s fun creating in 2020.”