Warning! Shark attack shuts down these beaches… - The Horn News 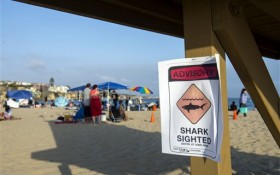 Surgeons repaired one massive bite wound from a shark that shredded a 52-year-old woman’s arm and torso in an attack that has shut down popular Southern California beaches for days, hospital officials said Tuesday.

Doctors expected Maria Korcsmaros to survive but said it was too early to know whether she will regain full use of her arm. Her extensive injuries included a semi-circular cut that extended from her shoulder down to her pelvis, according to doctors at Orange County Global Medical Center.

“It’s very obviously a mouth,” said Dr. Phillip Rotter of the shape of the main wound. “You could see individual marks from individual teeth.”

Korcsmaros also suffered fractured ribs, lung lesions and damage to the muscles and skin of her upper arm and abdomen. But she was alert and “remarkably calm” when she came into the emergency room Sunday, Rotter told reporters.

He spoke at a hospital press conference that was interrupted when someone in the audience apparently fainted as doctors described the wounds.

The mother of three was training for a half-triathlon competition off Corona Del Mar State Beach when she “felt something hit her,” Rotter said. Korcsmaros was not immediately sure it was a shark, he said.

Officials suspected her injuries came from the predator and kept thousands of holiday beachgoers out of the water Sunday and Monday as they searched miles of shoreline for the shark. But they had not been able to confirm it because there were no shark sightings or witnesses to the attack.

Lifeguards and officials in the city of Newport Beach were meeting Tuesday to decide whether to reopen the beach.

A lifeguard boat spotted Korcsmaros, who was swimming in a wetsuit, in distress Sunday, and she was bleeding heavily, city officials said. She was bitten while swimming about 100 yards offshore, just outside buoys marking a protected swimming area near where boats travel.

Lifeguards who saw her struggling witnessed the last part of the attack and quickly ruled out a boating or watercraft accident, said Rob Williams, chief lifeguard of the Newport Beach Fire Department’s Marine Operations Division.

The ban on entering the water stretched for several miles from the Balboa Pier to the city limits at Crystal Cove State Beach. While people were welcome on the beachfront and pier, lifeguards asked anybody entering the water to return to shore.