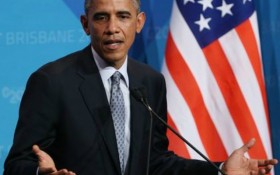 In what some critics are calling one of the most disrespectful moves of his presidency, President Barack Obama is skipping beloved former First Lady Nancy Reagan’s funeral.

Obama has announced he’s going to a music and technology festival instead.

Three days of formal mourning and solemn ceremonies for Nancy Reagan are set to begin today.

A small ceremony in the morning for family and friends in Santa Monica, California will be followed by a motorcade leading to a public viewing in the afternoon at Simi Valley’s Ronald Reagan Presidential Library that will continue on Thursday. Eight Secret Service agents who served the Reagans will act as pallbearers when the body is taken from the Santa Monica funeral home.

Obama also received an invitation, but has announced plans to miss the funeral so he can attend the annual South by Southwest (SXSW) festival in Austin, Texas instead. SXSW is a large annual music, film and interactive media gathering which drew more than 80,000 attendees last year.

He will be sending First Lady Michelle Obama in his place.

Friday will be the funeral — which was planned down to the smallest details by the former first lady herself. Just as she was always by his side in life, Nancy Reagan will be laid to rest just inches from President Ronald Reagan on a hillside tomb facing west toward the Pacific Ocean.

“No doubt about it, the most important of her special requests was that she be laid to rest right next to the president, as close as possible,” said John Heubusch, executive director of the Ronald Reagan Presidential Foundation and Library.

And while this former first lady and national treasure is laid to rest, Obama will apparently be busy glad-handing twenty-somethings and listening to independent rock music.