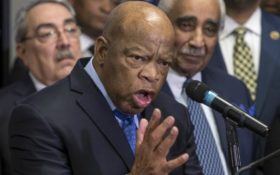 It’s an unprecedented insult. But worse, it is a shameful attack at the very core of our republic.

At least 20 House Democrats have announced their plans to skip the inauguration of our 45th president, Donald Trump.

Not even one day into the new administration and liberals are already playing politics.

This time, though, it’s different — and dangerous.

Because this anti-Trump insult comes at the expense of one of America’s greatest traditions: The peaceful transition of power.

Instead of calling for political healing, liberals are using a traditionally nonpartisan event as political theater to score cheap points with their left-leaning base — and are demonstrating their unwillingness to compromise and support the new president.

“I don’t see this President-elect as a legitimate president,” Lewis told friendly media outlet MSNBC, a shocking and divisive statement.

Congressman John Lewis should finally focus on the burning and crime infested inner-cities of the U.S. I can use all the help I can get!

Historians and others say this year’s political backlash over the inauguration is unusual.

Throughout American history, the inauguration has been a nonpartisan tribute to democratic traditions and the peaceful transfer of power.

Before the 2001 inauguration of George W. Bush., plenty of people harbored bitter feelings about the recount and Supreme Court ruling that left Republican Bush ahead of Democratic Vice President Al Gore. But former Bush press secretary Ari Fleischer doesn’t recall the same type of debate over whether to participate in the inauguration.