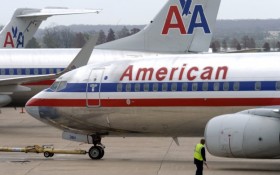 Seven people were hurt and five taken to hospital after an American Airlines plane from Miami to Milan made an emergency landing in Newfoundland after the jet briefly encountered severe turbulence.

The aircraft landed safely in the East Coast Canadian province late Sunday, where it was met by paramedics.

American Airlines spokesman Ross Feinstein said three flight attendants and two passengers were transported to hospital for further evaluation. He said none of the injuries are life threatening.

The seat belt light was on when the Boeing 767 carrying 192 passengers and 11 crew members encountered turbulence.

At least four ambulances and a fire truck were seen on the tarmac in St. John’s, Newfoundland. Paramedics rushed toward the plane with stretchers and what appeared to be a backboard.

An hour after the plane landed, one ambulance remained.

Feinstein said they are working on next steps to get the uninjured passengers to Milan.