Severe snow blankets Colorado. Here’s where the storm is heading next… - The Horn News 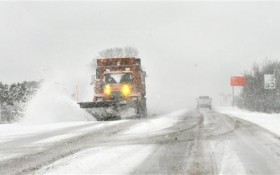 A powerful storm has blanketed Colorado with several inches of snow, and cold overnight temperatures are setting the stage for what will likely be a slick conditions for Denver and other communities just east of the mountains.

National Weather Service meteorologist Kyle Fredin said the storm was expected to drop up to 10 inches of snow in Denver by the time it moves out of the area late Tuesday morning, heading toward Kansas and Nebraska.

“The good assumption is that rush hour is going to be tricky,” Fredin said, adding that drivers should be careful of ice that is hidden under a fresh layer of snow.

Snow also was falling in parts of Wyoming, New Mexico and Arizona, and it’s expected to spread into Iowa on Tuesday, a day after voters gathered for the state’s presidential caucuses.

Possible blizzard conditions could complicate candidates’ plans to leave Iowa on Tuesday, when snow was also likely in Nebraska, South Dakota, Minnesota and Wisconsin. The forecast prompted Nebraska state lawmakers to cancel hearings and debates, and some schools in Minnesota and Wisconsin announced closures Tuesday.

The weather system that blew in from California steadily dumped snow on the Denver area Monday, forcing airlines to cancel about a third of the flights at the city’s airport. Transportation officials closed a handful of roads, including a long section of Interstate 70, in eastern Colorado on Monday night because of drifting snow and whiteout conditions.

Colorado’s mountains have gotten plenty of snow so far this winter. Some experts believe that is the result of an El Nino weather pattern, a natural warming in the Pacific Ocean that interacts with the atmosphere.

Jason Nonemaker was in Aspen for a work trip and said the heavy snow has delayed his travel plans for three days.

“This is the most snow I’ve ever seen here in Aspen,” he said. “This has been unbelievable.”

The same system also brought about a foot of record-breaking snow to Lake Tahoe-area ski resorts, along with rain and cool weather to other parts of Nevada. It caused a pileup on Interstate 80 on Sunday near the Nevada-California line.

In Utah, about a foot of snow has fallen in the southern part of the state and on the ski resorts in the mountains east of Salt Lake City.

In California, strong winds toppled power poles and trees, including one that killed a driver in San Diego County, and ripped off rooftops and even some solar panels.