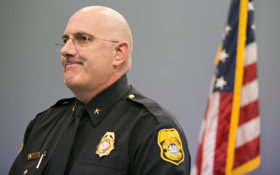 A fourth person was shot dead Tuesday in a Florida neighborhood where residents fear they are being stalked by a serial killer.

Tampa police say residents of the city’s Seminole Heights neighborhood reported hearing shots just before 5 a.m. Tuesday. When officers arrived, they found the body of a man in the street.

Spokesman Steve Hegarty said detectives can’t immediately say whether Tuesday’s shooting is related to last month’s spree where three people were slain during a 10-day span, leading to increased police patrols. All were alone and had gotten off a bus when they were gunned downed at night for no apparent reason. None were robbed.

Police have released surveillance videos of a hooded suspect. In a security video taken moments after Benjamin Mitchell became the first victim on Oct. 9, the suspect is running from the scene.

“I’ve come up with four reasons why this person is running,” Police Chief Brian Dugan said last month. “One, they may be late for dinner. Two, they’re out exercising. Three, they heard gunshots. And number four, they just murdered Benjamin Mitchell.”

Two days after Mitchell, 22, was shot, Monica Hoffa, 32, was gunned down. And on Oct. 19, Anthony Naiboa, 20, was shot after taking the wrong bus home from his new job. Police patrolling nearby heard the gunshots and rushed to the scene to find Naiboa dead.

Tampa Mayor Bob Buckhorn told officers at a briefing last month to hunt the suspect down and “bring his head to me.”

Residents and business owners have said there are car burglaries and fights between kids, but nothing like this.