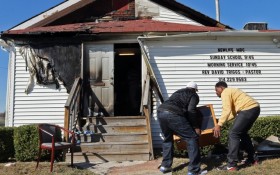 Authorities are warning that the fires could be the work of a serial arsonist who is targeting based on religion, race or both. The churches burned so far have predominantly served African Americans.

The front door of the Shrine of St. Joseph Catholic Church was set on fire on Thursday, and police are gathering clues they hope will help them catch the perpetrator and stop further attacks.

But investigators have no suspects or motives. The possibility of a hate crime — for religious or racial reasons — “is part of the dynamic” of the investigation, St. Louis Fire Capt. Garon Mosby said.

“This is a spiritually sick person,” said the Rev. David Triggs, whose New Life Missionary Baptist Church in St. Louis was one of the churches set on fire. “This is a sin issue. It’s not a race issue.”

The fires began Oct. 8 and have all happened within a few miles of each other in north St. Louis city and county. Damage has ranged from virtually nothing at one church to the near destruction of another.

John Ham, a spokesman for the U.S. Bureau of Alcohol, Tobacco, Firearms and Explosives, said the agency is investigating, along with St. Louis city and county arson squads. The ATF has jurisdiction over fires at all houses of worship, Ham said.