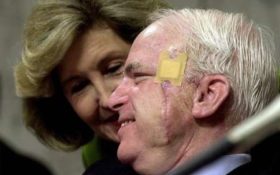 John McCain’s health has been on the downturn — and now there’s open speculation that the longtime Arizona senator could be on death’s door.

McCain has been undergoing treatment to fight what The Washington Post calls “an aggressive, highly lethal type of cancer” in his brain, called glioblastoma.

Now, insiders are warning that McCain’s health has recently taken a sharp downturn — and it’s negatively effecting his behavior and his ability to participate in his duties.

Other sources have come forward to warn that McCain is unable to participate in meetings as a side-effect of his treatment — and his behavior is “not normal.”

The Bible’s secret to defeating cancer… discovered in Maryland? [sponsored]

McCain’s longtime friend, South Carolina Sen. Lindsay Graham, an establishment Republican, has downplayed the talk. “He is receiving treatment for the side effects of therapy. I feel pretty good about the way the treatment is affecting his underlying cancer. But the treatment has a downside. So he is trying to rest up. I am very confident that he will come back and continue to participate for a long time to come.”

However, McCain’s initial diagnosis four months ago gives the senator only 8-12 months left to live, according to Matthias Holdhoff, an associate professor of oncology at Johns Hopkins University.

As a longtime Republican senator, McCain has become the source of scorn for conservatives in recent years for his willingness to surrender America’s future for cheap political points.

However, if McCain truly is on death’s door, it is time to set aside differences and pray for him and his family. Cancer is a brutal disease.

If he’s unable to perform his duties, it’s also time he step down and give his senatorial seat to a conservative successor.