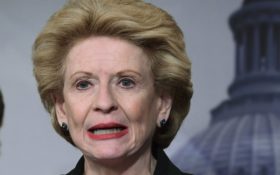 Stabenow says she “would have liked five minutes” with Nassar, a reference to what Randy Margraves told a judge last week before sheriff’s deputies stopped him from rushing at the serial sexual abuser.

Margraves’ three daughters are among the many women and girls who have said they were abused by Nassar.

Stabenow says, “I only wish that the security had been a little slower in constraining him ’til he could have gotten a couple of punches out.” The Michigan Democrat made her comments Wednesday during a news conference in Washington, D.C.

Nassar worked at Michigan State University and was team doctor for female Olympic gymnasts. He’s been sentenced to decades in prison for sexual assault and possession of child pornography.