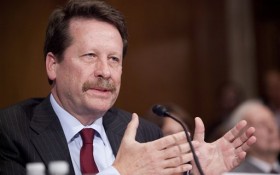 The Senate overwhelmingly confirmed President Barack Obama’s nominee to be commissioner of the Food and Drug Administration on Wednesday despite frustration over the agency’s response to the abuse of opioid painkillers.

The vote was 89-4 for Dr. Robert Califf, a prominent cardiologist and medical researcher at Duke University for more than 30 years and the FDA’s No. 2 official.

With only a year left in Obama’s presidency, Califf will be tasked with wrapping up many of the administration’s initiatives at the agency, including unfinished tobacco regulations and food safety and labeling reforms. He is expected to follow through on his pledge to re-evaluate how the agency regulates prescription painkillers like OxyContin amid an epidemic of abuse tied to those drugs.

Under pressure from the Senate, Califf said earlier this month the agency would add new warning labels to the most widely prescribed painkillers and increasingly consult with outside advisers on the medications.

“I believe Dr. Califf understands the dire nature of the opioid epidemic and, accordingly, I believe he is today the right person to lead the FDA in a new direction,” Senate Majority Leader Mitch McConnell, R-Ky., said this week.

Democratic presidential candidate Bernie Sanders, and Democratic Sens. Joe Manchin of West Virginia and Ed Markey of Massachusetts held up Califf’s nomination for several weeks in an effort to force the agency to be tougher on opioids and also prescription drug prices.

In 2014, U.S. deaths linked to misuse and abuse of prescription painkillers climbed to 19,000, the highest number on record, according to the Centers for Disease Control and Prevention. By its estimation, deaths tied to these drugs have risen more than four-fold since 1999 amid increased prescribing by U.S. doctors.

For years, the FDA has made only minor changes to the way it regulates painkillers like OxyContin and Percocet, despite the record levels of abuse and death tied to the highly addictive medications. Former Commissioner Margaret Hamburg repeatedly stressed the need to keep prescription opioid drugs accessible to patients with chronic pain.

“The FDA needs new leadership, new focus and a new culture,” Manchin said. “Dr. Califf’s past involvement with the pharmaceutical industry indicates that he will not be this person.”

In 2006, Califf founded the Duke University Clinical Research Institute, a contract research group that has conducted studies for virtually all of the world’s largest drugmakers.

Sanders did not leave the campaign trail to vote on the nomination, but he said in a statement that he would have opposed it.

Ayotte is in a tough re-election campaign, and New Hampshire has a significant drug abuse problem. She said on the Senate floor Tuesday that “there is so much more we need to do” on the prescription drug issue.

“There isn’t a place I go in my state where I don’t hear from a mother, a father, a sister, a brother, a grandmother, a grandfather, a friend about someone who lost a loved one, lost someone they care about, because of heroin, opioids, Fentanyl, the deadly combination that is killing people,” she said.

Despite the opposition, Califf’s nomination enjoyed wide Republican support in a year in which many of Obama’s nominees have been held up. Tennessee Sen. Lamar Alexander, the Republican chairman of the Health, Education, Labor and Pensions Committee, said he is confident that Califf can lead the agency “fairly and impartially.”