Senate candidate: "Yes, I sacrificed a goat and drank its blood" - The Horn News 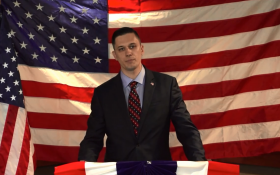 It’s almost too shocking — even for politics.

According to the Associated Press, two years ago Augustus Sol Invictus walked from central Florida to the Mojave Desert. He spent a week fasting and praying, at times thinking he wouldn’t survive.

In a pagan ritual to give thanks when he returned home, he killed a goat and drank its blood.

Now he wants your vote as a candidate for U.S. Senate from Florida.

Adrian Wyllie, who was the Libertarian candidate for governor last year, broke the story that Invictus had brutally and sadistically dismembered a goat.

It’s an awkward situation for the small party that’s trying to gain clout.

“He is the absolute exact opposite of a Libertarian,” Wyllie said. “It’s absolute insanity. We must explain to people this is the opposite of Libertarians. This guy has no place in the Libertarian Party.”

Invictus, a 32-year-old lawyer who changed his given name — which he declines to reveal — to a Latin phrase that means “majestic unconquered sun,” says Wyllie is just running a smear campaign and is twisting his words into lies.

“I did sacrifice a goat. I know that’s probably a quibble in the mind of most Americans,” he said. “I sacrificed an animal to the god of the wilderness … Yes, I drank the goat’s blood.”

He also admits he’s been investigated by the FBI, the U.S. Marshals and other law enforcement. He is confident they’re still watching him, in part for a series of YouTube videos and other writings in which he discusses government.