John McCain in trouble in reelection bid - The Horn News 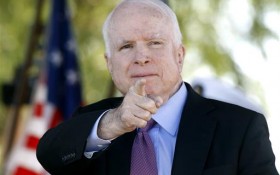 At age 79, running what may be his last campaign, Sen. John McCain finds himself on treacherous terrain.

A household name in Arizona and still beloved by many, the Republican is also confronting hostile and unpredictable forces this election year: The swirling voter anger that propelled Donald Trump to the brink of the GOP presidential nomination, and the resulting backlash from other groups, particularly Latinos, a growing force in his state.

The combination has left McCain to grasp for answers about his own political fortunes as he seeks a sixth term, and has set up what may be his toughest general election challenge in years. Three-term Democratic Rep. Ann Kirkpatrick is traveling the state arguing that McCain has been in Washington too long, and telling voters the incumbent has betrayed his reputation as an independent-minded maverick with his backing of Trump.

“There’s a degree of political turmoil that we have not seen before,” McCain said in assessing the challenges before him, as a blistering heat wave got under way in Phoenix on a recent morning. “I never take an election for granted, I’ve seen too many people that did and lost. But anyone who would take this election for granted, that is an incumbent is just out of touch with the frustration and even anger that is out there.”

McCain is a perennial target for conservatives in his state because of his deal-making with Democrats on issues like immigration, and many Republicans felt he dodged a bullet when he failed to draw a top-tier opponent in the GOP primary this year. He is expected to win the Aug. 30 contest, though his campaign is tamping down a challenge from state Sen. Kelli Ward, spending money on ads and websites linking her to conspiracy theories about aircraft spraying Americans with chemicals.

But the challenge from Kirkpatrick, combined with political upheaval around Trump, may prove especially formidable. It’s forcing McCain to perform a balancing act as he seeks to maintain support among Republicans while also cultivating independent voters and Latinos. He has performed versions of this same straddle time and again over the years, including as the GOP presidential nominee in 2008 and facing a strong primary challenge two years later. But this year his position looks particularly precarious, and the balance especially delicate.

“He’s changed,” Kirkpatrick said as she opened a campaign office in Tucson this past weekend. “He used to be a maverick, he used to be a straight talker, he used to stand for something. And people are just shocked that he’s supporting Trump.”

Every Republican senator in a competitive re-election race this year is in an uncomfortable predicament because of Trump, forced to support him or risk alienating his backers, yet compelled to create distance from the billionaire’s more outlandish pronouncements. For McCain, the situation is particularly sticky, partly because of the growing power of Latino voters in Arizona who may comprise more than 20 percent of the electorate this year and are horrified at Trump’s promises to build a giant wall along the southern border and deport millions.

McCain has also endured a stinging personal attack from Trump, who suggested that McCain was not really a war hero despite serving more than five years in captivity in Vietnam. Subsequently McCain suggested Trump should apologize not to him, but to other veterans, an apology that was never forthcoming. Questioned now about how he feels about Trump, McCain responded brusquely:

And what is he?

“He’s a phenomenon,” McCain replied with little elaboration, reiterating that he said he would support the GOP nominee and intends to do so.

As for how Trump affects his race, McCain said: “I think Trump adds to the turmoil, but he’s a product of the turmoil, not the cause of it. And so I’m not sure how much he affects me because I have 100 percent name ID in Arizona.”

On Memorial Day, McCain, who chairs the Senate Armed Services Committee, spoke at a ceremony at the large veteran’s cemetery on the outskirts of town, delivering heartfelt remarks about unheralded bravery and warning that peace is always only temporary.

Afterward, as the sun radiated on tombstones and cactus plants, dozens of people lined up to shake McCain’s hand and take pictures.

One was a woman wearing a Trump T-shirt, but after posing with McCain she declared that she did not actually support the senator. The woman would not give her name, but her husband identified himself as Dennis Frank, 61, and said of McCain: “He’s a wonderful guy, he’s a war hero, we love the guy to death, he’s served his country so well, but he’s got to retire and take it easy now. He needs to relax, you know? We need new blood, not only here. We need it in the White House. It’s a disaster what’s going on.”

“There’s only one hope in this country,” Frank asserted. “Donald Trump.”

Still McCain soldiers on, campaigning energetically around the state, shaking countless hands and recounting the many benefits Arizona has derived from his years of service. He insists voters still value such traditional achievements in a political world turned upside down by Trump but acknowledges that this year, he can’t predict how anything will turn out.

“It’s impossible to predict what’s happening with what’s already happened,” McCain said. “I think there’s going to be a lot of surprises.”