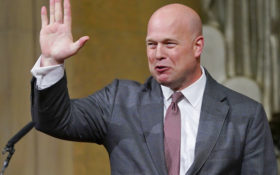 The suit, filed by Sens. Richard Blumenthal of Connecticut, Mazie Hirono of Hawaii and Sheldon Whitehouse of Rhode Island, argues that Whitaker’s appointment violates the Constitution because he has not been confirmed by the Senate.

Whitaker was chief of staff to Attorney General Jeff Sessions and was elevated to the top job after Sessions was ousted by President Donald Trump on Nov. 7.

The Constitution’s Appointments Clause requires that the Senate confirm all principal officials before they can serve in their office.

The Justice Department released a legal opinion last week that said Whitaker’s appointment would not violate the clause because he is serving in an acting capacity. The opinion concluded that Whitaker, even without Senate confirmation, may serve in an acting capacity because he has been at the department for more than a year at a “sufficiently senior pay level.”

The Justice Department issued a statement Monday defending Whitaker’s appointment as “lawful” and said it comports with the Appointments Clause, the Federal Vacancies Reform Act and legal precedent.

“There are over 160 instances in American history in which non-Senate confirmed persons performed, on a temporary basis, the duties of a Senate-confirmed position,” Justice Department spokeswoman Kerri Kupec said. “To suggest otherwise is to ignore centuries of practice and precedent.”

The Federal Vacancies Reform Act allows an acting official to serve in a vacant position for up to 210 days, though the official may continue serving while a president’s nomination to that position is pending before the Senate.