Secret Service failing to protect our presidents - The Horn News 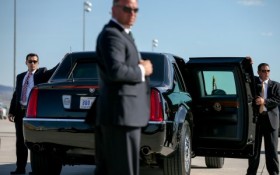 The Secret Service is an “agency in crisis”, according to a damning new House Oversight and Government Reform Committee report that slammed the organization.

There have been 143 security breaches or attempted breaches at facilities secured by the Secret Service in the last 10 years, including the agency letting armed, unchecked contractors dangerously close to the president.

The committee concluded in a report released Thursday that the Secret Service is in turmoil after a series of high-profile embarrassments over several years, including a South American prostitution scandal and multiple security breaches involving he White House. The report faults both leadership failings within the agency and budget cuts have led to what the committee concluded was a “staffing crisis.”

The committee is chaired by Utah Republican Rep. Jason Chaffetz and has been investigating the agency since details of the April 2012 prostitution scandal became public. Three directors have led the Secret Service in the last three years and multiple agents and officers, including senior officials, have been fired, transferred or disciplined in the last several years as details of scandals and security breaches have become public.

“This report reveals that the Secret Service is in crisis,” Chaffetz said. “Morale is down, attrition is up, misconduct continues and security breaches persist. Strong leadership from the top is required to fix the systemic mismanagement within the agency and to restore it to its former prestige.”

Most recently it was revealed that dozens of agents used a secure government database to view Chaffetz’s decade-old, unsuccessful job application starting 18 minutes after the start of hearing focused on another scandal involving allegations of drunken driving involving two senior officials.

The yearlong investigation also found new information about past scandals, including the Colombia prostitution case.

The report said that the Secret Service’s own investigation of that incident uncovered multiple emails sent between agents and officers discussing the trip and eluded to plans to enjoy their surroundings. One email described the motto of the trip as “una mas cerveza por favor,” or one more beer please. Another listed a check-list of things an agent planned to bring, including “swag cologne,” ”pimp gear” and cash for prostitutes.

The committee also found that agents failed to properly vet multiple armed security guards who were near President Barack Obama during a September 2014 visit to the Centers for Disease Control and Prevention in Atlanta. During that trip Obama rode an elevator with an armed contractor who had not been vetted.

Then-Director Julia Pierson was fired after details of that incident were published by The Washington Post.

The 438-page report also found that the agency is understaffed and agents and officers are overworked.

The committee said the agency’s staffing crisis started in 2011. The agency has fewer employees today than a year ago, despite recommendations from an independent panel that staffing be increased.