Secret history of Democrats and fixed elections - The Horn News 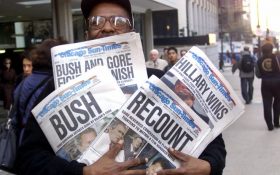 Democrats all but accused GOP nominee Donald Trump of treason when he implied our elections may be rigged. The mainstream media is foaming at the mouth with anger.

But there’s a secret history they’re avoiding. When they lose, they don’t play by their own rules.

Trump is popular because he’s saying things the American people have known for a long time.

It’s called honesty. And it’s shaking the political world to the core.

Donald Trump perfectly side-stepped the Democrats’ trap at this week’s presidential debate. When Chris Wallace asked him if he would say the 2016 election was fair, Trump responded, “I will tell you at the time. I’ll keep you in suspense.”

Hillary worked up her best mock outrage to say, “That’s horrifying.” She brought it up again Thursday night during her unfunny speech at the Al Smith dinner, saying, “It’s amazing that I’m up here after Donald. I didn’t think he’d be OK with a peaceful transition of power.”

Some commentators – of both halves of D.C.’s ruling class – even say Mr. Trump’s defiance “undermines democracy.”

On Tuesday, Barack Obama said Mr. Trump was “whining” and “trying to discredit the elections and the election process.”

But when these same political insiders lose, all their make believe respect for the American people goes out the window. Let’s remember.

In 2000, Al Gore went all the way to the Supreme Court to try to steal an election he narrowly lost to George W. Bush.

Outside the courthouse, Jesse Jackson told the media, “We will take to the streets right now. We will delegitimize Bush, discredit him, do whatever it takes, but never accept him.”

The Democrats lost, but they never forgot.

They spent the next eight years calling George W. Bush “President Select” and launched a line of “Not My President” t-shirts.

And guess who got in on the action? None other than Hillary Clinton. In 2002, she said Bush had been “selected” president, not elected.

Oops. So much for their moral high ground.

The decision to “delegitimize” President Bush continued four years later. Then-Democrat nominee John Kerry held up the election based on a few votes in Ohio, and waited 24 hours to concede – but he and his family have said the election was stolen for more than a decade.

Months after his loss, Kerry’s wife Teresa Heinz told a group of Democrats in Seattle, “Two brothers own 80 percent of the [voting] machines used in the United States.” She said it is “very easy to hack into the mother machines.”

If anyone knows how easy it is to rig an election, it’s a Democrat.

It’s not just Teresa. A New York University professor, Mark Crispin Miller, said that John Kerry personally “told me he now thinks the election was stolen. He says he doesn’t believe he is the person that can be out in front because of the sour grapes question. But he said he believes it was stolen.”

How deep does the distrust go? Kerry, now President Barack Obama’s secretary of state, even insults the integrity of U.S. elections when talking to foreign Muslim leaders.

He told an Afghan presidential candidate named Abdullah Abdullah that “we had problems in the state of Ohio on how the votes were taking place” in 2004.

“Even in my country, the United States, where we had hundreds of years of practicing democracy, we still had problems carrying out that election,” Kerry said.

Folks, that is straight from the mouth of a senior Obama administration insider!

If that doesn’t prove there’s a problem that both sides recognize, what does?

How about undeniable video evidence.

In the video, they brag about getting away with large scale voter fraud for decades.

Trump has sent the establishment a clear message: You’re not going to cheat the American voters. Not this year!

The Democrats hope Hillary will be an extension of Obama and continue their liberal goals of forever altering this country. To achieve these goals, they’ll happily steal the election if they can get away with it.

They themselves have admitted that it happens.