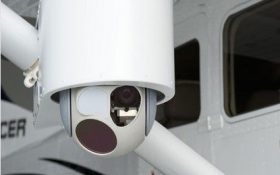 Residents of a major American city have been spied upon through a shady government program.

They didn’t know a thing about it — and it looks like the kind of thing that could happen just about anywhere.

Baltimore police, using money provided by a wealthy, anonymous donor, have been surveilling the city with a manned plane loaded with cameras that can view 30 square miles.

The existence of the program was made public Tuesday in a lengthy report by Bloomberg Businessweek.

At a news conference on Wednesday, Police Department spokesman T.J. Smith repeatedly insisted to reporters that the test program, which began in January, was not a secret.

“It’s not a secret spy plane,” Smith said as reporters pressed him for an explanation for the lack of information. “There’s no conspiracy to not disclose it.”

Of course, citizens didn’t know about it — and it was not disclosed.

The test program lets the department evaluate the effectiveness of a potential tool in the department’s crime-fighting arsenal, Smith said.

The program tests products and services from Persistent Surveillance Systems. Phase 1, Smith said, included 100 hours of the plane flying over the city in January and February. The program is now in Phase 2, working toward 200 hours that began in mid-June. Phase 2 will end in a few weeks; the department “doesn’t have a plan to move forward beyond that,” Smith said.

The ACLU of Maryland expressed outrage at the program. “The fact that the (police department) has been engaged in a secret program of mass surveillance is both incomprehensible and unacceptable,” David Rocah, senior staff attorney, said in a statement.

“The surveillance program itself is a privacy nightmare come to life and precisely what we have warned against for years,” Rocah continued.

Smith said at the news conference, “We aren’t surveilling or tracking anyone. The only ones who should be concerned are criminals.”