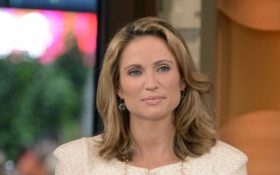 Secretly obtained footage of ABC Star Amy Robach complaining about a Jeffrey Epstein cover-up just stunned America — and shows the conspiracy around his death may go deeper than anyone ever guessed.

Conservative website Project Veritas released a secret video of Robach venting that “everyday I get more and more pissed” that her interview with Virginia Roberts never made the air. Roberts was one of the first and most credible victims to come forward and claim Epstein and his powerful friends raped her when she was underage.

The video was taken while Robach was in ABC News’ Times Square studio, but not on the air, in late August. Her conversation is caught by a “hot mic.”

What she said was shocking.

“I’ve had this story for three years,” Robach is shown complaining. “I’ve had this interview with Virginia Roberts — we would not put it on the air. First of all, I was told: ‘Who’s Jeffrey Epstein? No one knows who that is; it’s a stupid story.'”

Robach complained in the video that rich and powerful men, including those inside the British Royal Palace, pressured ABC News to “kill” the story involving Epstein.

“Then the [British] Palace found out that we had her whole allegations about Prince Andrew and threatened us in a million different ways,” Robach continues. She suggested that the network feared that airing the interview would hurt its ability to get interviews with Prince William and Kate Middleton.

“I tried for three years to get it on, to no avail,” Robach said. “And now it’s all coming out, and it’s like these new revelations — and I freaking had all of it.”

“Oh my God… what we had was unreal,” she continued. “Other women backing it up, and Brad Edwards the [victim’s] attorney saying, three years ago, like, ‘There will come a day when we will realize Jeffrey Epstein was the most prolific pedophile this country has ever known.'”

“I had it all three years ago,” Robach continued.

“The creepy thing is that we’d have access to all these high-profile people,” an ABC News worker is heard saying back.

Robach says that was her main concern was why the story was “spiked” by the bosses — and went on to claim Epstein was murdered to keep the story silent.

“So, do I think he was killed? A hundred percent, yes I do,” Robach said. “He made his whole living blackmailing people. There were a lot of men in those planes, a lot of men who visited that island, and a lot of powerful men who came to that apartment.”

The Horn News began reporting on Epstein’s ties to the Clinton family during that period Robach is complaining about.

Project Veritas says the video came from an ABC insider, but it did not identify the person.

ABC News denied wrongdoing Tuesday when asked why it “killed” the sexual misconduct story with the Epstein accuser. The station’s public relations department claimed the three-year-old interview simply wasn’t ready to air. Robach said she the video caught her “in a private moment of frustration.”

Project Veritas is known for its efforts to try and embarrass mainstream media outlets, often sending undercover reporters to catch employees making statements that display an anti-conservative bias. But it needed no such help with the Robach video.

ABC denied that outside pressure had anything to do with its decision on the Roberts interview.

“At the time, not all of our reporting met our standards to air, but we have never stopped investigating the story,” ABC News said in a statement Tuesday.

You can see the stunning “hot mic” tape here —