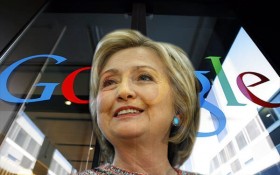 For years, WikiLeaks founder Julian Assange has been one of the most outspoken critics of Hillary Clinton.

And yesterday, Assange had a dire warning for the American public.

Clinton has a secret weapon that could rig the 2016 presidential election — and it’s the Internet giant Google, Inc.

Speaking out from the Ecuadorian embassy in London, where Assange is currently sheltering from various international warrants, the blonde-haired Australian addressed the “New Era of Journalism: Farewell to Mainstream International Media” forum in Moscow via video.

In his speech, Assange claimed that “Google is directly engaged with Hillary Clinton’s campaign” and the U.S. State Department in a “a quid pro quo” relationship — a chilling accusation.

“Google is heavily integrated with Washington power, at a personal level and a business level,” Assange said, and the company will “inevitably influence its audience.”

This isn’t the first accusation of disturbing Google-Clinton ties.

In October 2015, Assange had said he believed that “Google was now Hillary’s secret weapon,” at an open government conference in Mexico. The Huffington Post, covering the event, reported, “Assange was referring to The Groundwork, a stealthy startup funded by Google Chairman Eric Schmidt that’s providing consulting services to former Secretary of State Hillary Clinton’s campaign.”

According to The Huffington Post, “While Schmidt has said that he would not work in a Clinton administration, he does support her presidential campaign. Google also has close ties to the Obama administration, with a number of former employees serving in top positions, from U.S. Chief Technology Officer Megan Smith to the head of the U.S. Patent Office, Michelle Lee. The chief technology officer of Clinton’s campaign, Stephanie Hannon, was also hired from Google.”

The implications of such a relationship are very serious, technology experts note. Google’s ability to influence the outcome of elections has been a hot-button topic before.

“There are at least three very real scenarios whereby Google — perhaps even without its leaders’ knowledge — could shape or even decide the election next year,” Robert Epstein, a senior research psychologist at the American Institute for Behavioral Research and Technology, wrote in a 2015 POLITICO Op-ed. “Whether or not Google executives see it this way, the employees who constantly adjust the search giant’s algorithms are manipulating people every minute of every day. The adjustments they make increasingly influence our thinking—including, it turns out, our voting preferences.”

“Our new research leaves little doubt about whether Google has the ability to control voters. In laboratory and online experiments conducted in the United States, we were able to boost the proportion of people who favored any candidate by between 37 and 63 percent after just one search session,” Epstein warned.

The scenario is sure to have some Clinton rivals outraged, especially when one considers that Google has been hit with antitrust lawsuits by international regulatory commissions for manipulating search results for business purposes.

In 2015, “The European Union hit Google Inc. with a double-whammy …, formally accusing it of abusing dominance of the online search market and opening a new formal probe into its control of the Android operating system for similar abuses,” Fortune reported. According to British newspaper The Sunday Telegraph, the potential fines are huge — it could cost Google up to $3.4 billion.

The fines may have provided a lesson to Google that it’s important to make sure friends are in power, especially in its largest markets like the United States.