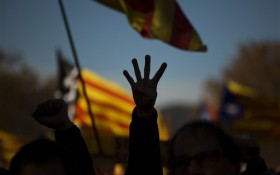 In Spain, around 3,000 protesters gathered in Barcelona to support an organization that seeks the creation of a Catalan state independent and urged regional lawmakers to reach an agreement to form a transitional government.

The Catalan National Assembly, with about 30,000 fee-paying members, called Sunday’s rally to lobby 10 lawmakers from the far-left CUP group and 62 parliamentarians from the “Together for Yes” alliance to set aside differences and break a logjam that is paralyzing progress toward an independent Catalonia.

“We ask all 72 lawmakers from Together for Yes and CUP to be responsible, courageous and firm, and to show a willingness for dialogue to reach the best possible agreement for the formation of a strong and united government,” said CNA president Jordi Sanchez.

The parliament of Catalonia has until Jan. 10 to elect a leader and form a government or it must call a new election. Sanchez asked the lawmakers to try and reach a deal by Nov. 27.

With 72 seats, pro-secessionists would hold the majority in the 135-seat regional parliament, although they only secured 48 percent of the popular vote in September elections.