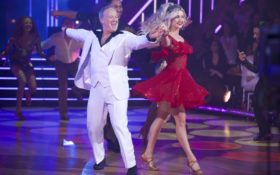 Former White House Press Secretary Sean Spicer’s time on “Dancing with the Stars” is over.

And now that he has left the ballroom floor behind, he’s transitioning back to government work.

He’s is now a member of the U.S. Naval Academy’s Board of Visitors, appointed by President Donald Trump.

Spicer was sworn in Monday during a board meeting in Annapolis, Maryland. The board reviews the state of morale and discipline at the academy and its curriculum and fiscal affairs. It includes members of Congress.

Spicer holds a master’s degree from the Naval War College in Rhode Island.

He served as White House press secretary for President Donald Trump when he came into office. He resigned from the job in July 2017.

The president announced he was nominating Spicer to serve on the board in July.

Spicer’s new appointment will be a drastic change from his previous gig on “Dancing with the Stars,” where he endured scrutiny by the media and survived attacks on social media.

Liberals were outraged from the onset that someone who worked for Trump’s administration was given the chance to participate — and the outrage grew after he continued to advance week after week.

It’s likely that his time on the show was bolstered by Trump, who often tweeted support for the former press secretary and urged Americans to support him as well.

A great try by @seanspicer. We are all proud of you!