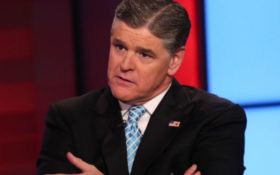 Schiff claimed over the weekend he had seen “plenty of evidence” that President Donald Trump had colluded with Russia in the 2016 election.

Hannity destroyed the claim with a simple question: So, where is it?

“Where is it? We’ve been looking for a long time,” Hannity demanded on his primetime show Monday. “We do have evidence of collusion, though… Russian collusion in plain sight. Alright, let’s look ‘Shiftless’ Schiff.”

Then, Hannity turned the entire story on it’s head with a killer point — Schiff is the one guilty of foreign collusion, not the president.

“He could easily be talking about himself. Remember when he tried to dig up dirt on President Trump from his own Russian sources!? It turns out he was being pranked by a Russian radio personality. He thought he was talking with the Russians. A conspiracy — a collusion with the Russians and we actually, Mr. Mueller, we have evidence,” Hannity said.

He then played a tape of Russian pranksters calling Schiff and claiming to have nude photos of Trump from January.

Schiff is heard on the tape saying he’d have staff follow-up on the offer.

“Collusion. Conspiracy. Russians. Tape. Proof! Where is the media outrage over the attempt to collude and conspire with Russia?” Hannity asked. “Or is it only a crime if a Republican is trying to dig up political dirt and opposition research on an opponent? This time we have the tape of the whole thing. Imagine if we had a tape of the meeting in Trump Tower …. which was about Russian adoption?”

It only keeps going from there. Take a look for yourself —