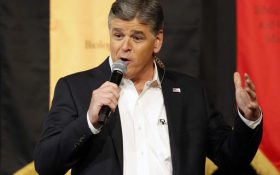 It seems Fox News star Sean Hannity is increasingly fed up with the mainstream media — and Monday he unloaded with both barrels on the bias against President Donald Trump.

Monday’s edition of “Hannity” opened with an unusually sharp monologue from the host, where he lambasted the media for their treatment of Trump at Saturday’s annual White House Correspondents’ Dinner.

“Really? He’s supposed to go hang out with all of you, the elitists?” Hannity asked, before he really turned up the heat.

“The mainstream media utterly despises President Trump, it’s dripping from every word they say. They can’t stand him, and in the end, they would rather throw him out of office,” the host said.

It’s not just Trump, either.

The liberal media is seeking to “destroy anybody else, like me… anybody in the media that dares agree with him and supports him,” Hannity said.

Hannity wasn’t the only Fox News anchor to weigh in on the media’s bias, either. Tucker Carlson, who recently took over the 9:00 p.m. Eastern primetime slot from Bill O’Reilly, called the White House Correspondent’s Dinner an “extended middle finger to the president.”

It’s was “an expression of dislike for the president. And the press shouldn’t like or dislike politicians, should it?” Carlson asked.

Over the weekend, rather than attend, Trump held a campaign-style rally in Harrisburg, PA where he told the crowd the media wasn’t worth his time.

“A large group of Hollywood actors and Washington media are consoling each other inside a hotel ballroom in our nation’s capital right now,” Trump told the cheering crowd.

“They are gathered together for the White House Correspondents’ dinner… without their president! And I could not possibly be more thrilled than to be more than 100 miles away from Washington’s swamp, spending my evening with all of you and with a much, much larger crowd and much better people,” Trump said.