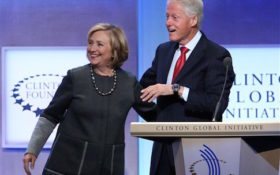 A shocking leak has revealed the liberal organizations behind the conspiracy to have former Fox News host Bill O’Reilly fired — and they all connect directly to failed Democratic presidential candidate Hillary Clinton.

Over 80 advertisers reportedly pulled their money from O’Reilly’s show, and the company finally caved Wednesday and announced the popular host had been fired.

According to O’Reilly himself, there were two liberal organizations behind the advertiser campaign: Media Matters, a self-titled “media watchdog”, and The Bonner Group.

An email revealed Wednesday by TheBlaze radio host Glenn Beck shows how these liberal groups were pulling advertiser strings from the shadows — and how they’re both deeply connected to Hillary and Bill Clinton.

The Bonner group/A Super PAC and fundraiser for Hillary & DNC. The Campaign against Bill OReily is orchestrated by MM & BG. #Smearproof pic.twitter.com/fklnDFuv5w

According to O’Reilly’s lawyer Marc E. Kasowitz, the email proves these two organizations, run by longtime Clinton pals Mary Pat Bonner and David Brock, were leaders of a conspiracy against O’Reilly.

“Bill O’Reilly has been subjected to a brutal campaign of character assassination that is unprecedented in post-McCarthyist America,” Kasowitz warned in an Apr. 18th statement. “This law firm has uncovered evidence that the smear campaign is being orchestrated by far-left organizations bent on destroying O’Reilly for political and financial reasons.”

Liberal activist and Color of Change executive director Rashad Robinson told Salon Magazine the leftist campaign against O’Reilly had been two years in the making, and they used The New York Times story as the final push.

“Once the Times story broke in early April, Color of Change, the women’s rights group UltraViolet, the National Organization for Women, the media watchdog Media Matters and a loose coalition of advertising insiders who call themselves the Sleeping Giants mobilized thousands of people to sign petitions and contact O’Reilly’s advertisers to urge them to remove their sponsorships,” Salon reported.

Where these advertisers have directed their spending has raised eyebrows around the beltway as well.

“When I looked into this, AllState Insurance, they put out that they’re going to decide to decouple themselves from Fox and all of that kind of thing. Then you check and see that they’re working with the Clinton Foundation on ‘developing a domestic violence program,’” Lord told Dom Giordano Friday on local station 1210 WPHT.

“Now, one is left a little speechless here about this kind of thing. Mitsubishi and T. Rowe Price, I could’ve gone on and on and on and on. I just picked a handful of these at random,” Lord said. “T. Rowe Price was listed as one of the ex-O’Reilly sponsors and yet you go the Federal Elections Committee and it reveals they were contributors to a political group called Investment Company Institute Political Action Committee, which, in turn, gave contributions to Hillary Clinton.”

Under pressure from Clinton-loyalists, companies like AllState, Mitsubishi, Hyundai, T. Rowe Price, and dozens more pulled millions of dollars from O’Reilly’s program — and shoved them straight into the Clinton’s pockets.

And Fox News let them get away with it.