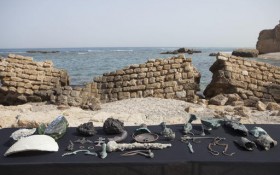 A chance discovery by two divers uncovered Israel’s biggest find of underwater Roman-era artifacts in three decades, archaeologists said Monday as the priceless objects were showcased for the first time.

The treasures were found last month by divers Ran Feinstein and Ofer Raanan when they came across an ancient shipwreck near the port of Caesarea.

Standing next to his diving buddy, Raanan recounted the moment the pair realized they had discovered something special.

“It took us a couple of seconds to understand what was going on,” Raanan recalled. He said they left the first 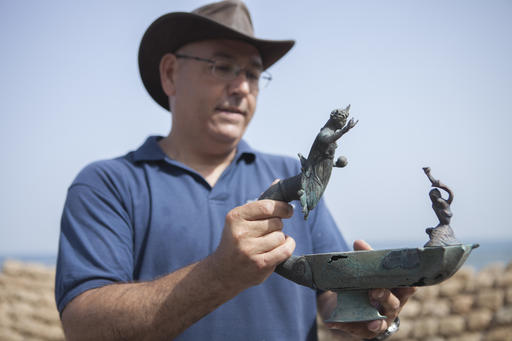 sculpture on the seabed when they found it, but then when they discovered a second, they realized it was something special and brought it to the surface. They later searched the area and uncovered more ancient artifacts.

“It was amazing. I dive here every other weekend and I never found anything like that ever,” he said.

The Israel Antiquities Authority sent its divers to investigate and recover the precious Roman-era cargo, which includes bronze statues, lamps, jars, animal-shaped objects, anchors and thousands of coins with images of Roman emperors Constantine and Licinius.

Some of the objects date to the fourth century, while others are from the first and second centuries, said Jacob Sharvit, director of marine archaeology at the IAA.

After possibly encountering a storm, sailors dropped the anchors to try to save the ship, Sharvit said, but all their attempts failed; the ship drifted and all its cargo plunged into the water at Caesarea and remained there for 1,700 years.

The port at Caesarea was commissioned by Herod the Great in the first century BC and became an important economic artery in the Mediterranean Sea until it sank for unknown reasons soon after its completion. Some scientists believe it is located on a geological fault line; other theories point to a tsunami.

Starting in the 1960s, Israeli archaeologists brought the sunken port back to life, along with Caesarea’s above-ground wonders, including a crusader church and Roman theater. These archaeological treasures are open to visitors as part of the Caesarea National Park.