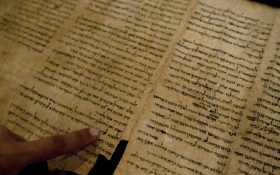 A secrets contained in a mysterious scroll that has remained unopened for thousands of years has just been revealed — and it’s good news for Christian believers.

The mysterious, charred lump of a 2,000-year-old scroll sat in an Israeli archaeologist’s storeroom unread for decades.

Scientists knew it was too brittle to open, so they couldn’t read what was in side. Now, new imaging technology has revealed what it contains: the earliest evidence of a biblical text in its standardized form.

It’s proof of what Christian and Jews have claimed for centuries — the Holy Bible that was have today has remained constant through history, and that God’s infallible word hasn’t been changed by man’s influence since Jesus Christ walked the earth.

The passages from the Book of Leviticus, scholars say, is the first physical evidence of what has long been believed: that the version of the Hebrew Bible used today goes back 2,000 years.

The discovery, announced in a Science Advances journal article by researchers in Kentucky and Jerusalem on Wednesday, was made using “virtual unwrapping,” a 3D digital analysis of an X-ray scan. Researchers say it is the first time they have been able to read the text of an ancient scroll without having to physically open it.

“You can’t imagine the joy in the lab,” said Pnina Shor of the Israel Antiquities Authority, who participated in the study.

The digital technology, funded by Google and the U.S. National Science Foundation, is slated to be released to the public as open source software by the end of next year.

Researchers hope to use the technology to peek inside other ancient documents too fragile to unwrap, like some of the Dead Sea Scrolls and papyrus scrolls carbonized in the Mt. Vesuvius volcano eruption in 79 CE. Researchers believe the technology could also be applied to the fields of forensics, intelligence, and antiquities conservation.

The biblical scroll examined in the study was first discovered by archaeologists in 1970 at Ein Gedi, the site of an ancient Jewish community near the Dead Sea. Inside the ancient synagogue’s ark, archaeologists found lumps of scroll fragments. 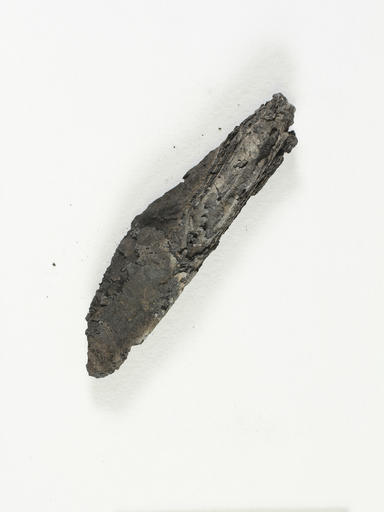 The synagogue was destroyed in an ancient fire, charring the scrolls. The dry climate of the area kept them preserved, but when archaeologists touched them, the scrolls would begin to disintegrate. So the charred logs were shelved for nearly half a century, with no one knowing what was written inside.

Last year, Yosef Porath, the archaeologist who excavated at Ein Gedi in 1970, walked into the Israel Antiquities Authority’s Dead Sea Scrolls preservation lab in Jerusalem with boxes of the charcoal chunks. The lab has been creating hi-resolution images of the Dead Sea Scrolls, the earliest copies of biblical texts ever discovered, and he asked researchers to scan the burned scrolls.

“I looked at him and said, ‘you must be joking,'” said Shor, who heads the lab.

She agreed, and a number of burned scrolls were scanned using X-ray-based micro-computed tomography, a 3D version of the CT scans hospitals use to create images of internal body parts. The images were then sent to William Brent Seales, a researcher in the computer science department of the University of Kentucky. Only one of the scrolls could be deciphered.

Using the “virtual unwrapping” technology, he and his team painstakingly captured the three-dimensional shape of the scroll’s layers, using a digital triangulated surface mesh to make a virtual rendering of the parts they suspected contained text. They then searched for pixels that could signify ink made with a dense material like iron or lead. The researchers then used computer modeling to virtually flatten the scroll, to be able to read a few columns of text inside.

“Not only were you seeing writing, but it was readable,” said Seales. “At that point we were absolutely jubilant.”

The researchers say it is the first time a biblical scroll has been discovered in an ancient synagogue’s holy ark, where it would have been stored for prayers, and not in desert caves like the Dead Sea Scrolls.

The discovery holds great significance for scholars’ understanding of the development of the Hebrew Bible, researchers say.

Scholars have believed the Hebrew Bible in its standard form first came about some 2,000 years ago, but never had physical proof, until now, according to the study. Previously the oldest known fragments of the modern biblical text dated back to the 8th century.

The text discovered in the charred Ein Gedi scroll is “100 percent identical” to the version of the Book of Leviticus that has been in use for centuries, said Dead Sea Scroll scholar Emmanuel Tov from the Hebrew University of Jerusalem, who participated in the study.

Noam Mizrahi, a Dead Sea Scrolls expert at Tel Aviv University who did not participate in the study, called it a “very, very nice find.” He said the imaging technology holds great potential for more readings of unopened Dead Sea Scrolls.

“It’s not only what was found, but the promise of what else it can uncover, which is what will turn this into an exciting discovery,” Mizrahi said.