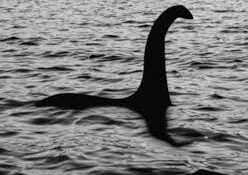 The Loch Ness Monster may not just be a fun myth, scientists have announced.

After an unexpected fossil discovery in Morocco’s Sahara desert, researchers have discovered that it is entirely plausible a prehistoric plesiosaur lived — or lives — in the Scottish lake.

First reportedly sighted in 585, fans of the Scottish folklore theorized that the Loch Ness Monster is a pod of prehistoric plesiosaurs that were trapped in the freshwater lake when it was cut off from the ocean.

One theory is that the population of this theoretical plesiosaur pod trapped in the large lake has dwindled over the centuries, making sightings incredibly rare.

Critics pointed out that plesiosaurs were saltwater creatures, making their survival in a freshwater loch impossible.

That was until researchers at the University of Bath announced a startling find. In a 100-million-year-old freshwater river system in modern-day Morocco, fossils of small plesiosaurs were found that suggest the water dinosaurs did, in fact, live in freshwater.

“We don’t really know why the plesiosaurs are in freshwater,” Dr. Nick Longrich, co-author of the paper, told the Telegram.

Teeth of the plesiosaurs suggest they weren’t just lost: They were regular visitors to the river systems and fed on the armored fish that swam in the freshwater area.

“What amazes me is that the ancient Moroccan river contained so many carnivores all living alongside each other,” co-author of the study Dave Martill, a professor of palaeobiology said. “This was no place to go for a swim.”

Take a look at the bone pictures below —

🏴󠁧󠁢󠁳󠁣󠁴󠁿 Nessie proponents have long believed that the creature of Scottish folklore could be a prehistoric reptile, with grainy images and eyewitness accounts over the years hinting that the beast has a long-neck and small head similar to a plesiosaur

However, skeptics argue that even if a plesiosaur lineage had survived into the modern era, the creatures could not have lived in Loch Ness because they needed a saltwater environment 👇 pic.twitter.com/TycoVkztH1

They hint these creatures routinely lived and fed in freshwater, alongside frogs, crocodiles, turtles, fish and the aquatic dinosaur Spinosaurushttps://t.co/nbkNfUyjWY pic.twitter.com/ZzGPLVdooQ

🦷 The plesiosaur teeth even show the same heavy wear patterns of the Spinosaurus, suggesting they were regularly feeding on the same heavily-armoured fish that swam in the river system, rather than simply being occasional visitorshttps://t.co/nbkNfUyjWY pic.twitter.com/FwOM4FwHWx

🧬 Its link to the Loch Ness Monster was first made by Arthur Grant, a veterinary student, who claimed to have nearly hit the creature on his motorcycle in January 1934 and described it as a cross between a seal and plesiosaur.