Scientists discover a stash of diamonds worth... HOW MUCH!? - The Horn News 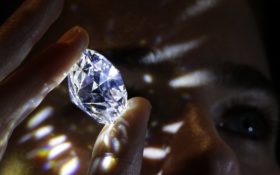 A team of scientists have just hit the jackpot on finding the highest valued buried treasure.

Researchers from MIT have reportedly unearthed a quadrillion tons of buried diamonds hidden under the Earth’s surface.

According to Country Living, sound waves detected the diamonds within cratonic roots — “the oldest sections of rock that lie underneath the centre of most continental tectonic plates.”

Researchers are estimating that the cratonic roots contain anywhere from 1% to 2% diamond.

New @eapsMIT study finds that 1-2 percent of the Earth's oldest mantle rocks are made from diamond. https://t.co/Hxrf3i72Up pic.twitter.com/jsGdGESKBa

Don’t break out the pick-axes yet, though. These diamonds are located more than 100 miles below the surface, further than anyone has ever drilled.

The sections of rock that the diamonds are located on are called ‘roots’ by geologists due to their ultra-depth.

“This shows that diamond is not perhaps this exotic mineral, but on the [geological] scale of things, it’s relatively common,” said Ulrich Faul, a research scientist in MIT’s department of Earth, Atmospheric, and Planetary Sciences.

Although scientists will not be able to reach the diamonds, they said they were amazed by how many there are located under Earth’s surface — more than they ever thought.

Faul added, “Diamond in many ways is special. One of its special properties is, the sound velocity in diamond is more than twice as fast as in the dominant mineral in upper mantle rocks, olivine.”