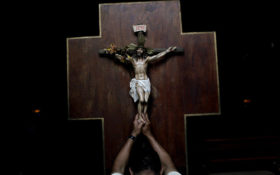 New revelations have emerged from a holy Christian site that has left archaeologists stunned.

The Holy Sepulchre in Jerusalem, rumored to be built above the tomb of Jesus Christ, has suffered from attacks, fires and earthquakes — it was even destroyed in 1009 and then rebuilt.

For thousands of years, scholars have been questioning if it was truly the burial place of Christ? Or was it all just a rumor?

Looking to discover the truth, scientists have run tests and the results have appeared to confirm that remains found of a limestone cave enshrined within the church are the from the tomb founded by ancient Christian Romans.

Historical records state that the tomb was discovered in 326, but mortar samples from the original limestone surface of the structure are dated to A.D. 345… when Roman emperor Constantine converted the empire to Christianity and began to preserve historic sites important to the new religion.

Until these recent findings, the earliest architectural evidence came from only 1,000 years ago in the Crusader period.

In other words, this discovery confirmed that the site has been preserved and protected as Christ’s tomb by the earliest Christians into modern times.

According to the New Testament, Jesus Christ was crucified in Jerusalem in 30 or 33.

In October 2016, the tomb was reopened for the first time in centuries by an interdisciplinary team from the National Technical University of Athens.

The team performed a significant restoration on the shrine that encloses the tomb, the Edicule.

Then the scientific team tested several pieces of mortar from different locations on the tomb itself.

Features of the tomb include a long shelf which according to tradition was the burial bed for Jesus Christ. The marble cladding that covers the burial bed was believed to have been installed in 1555.

In 2016 when scientists opened the tomb, they found an older broken marble slab marked with a cross that was beneath the marble cladding.

Researchers believe this piece was added during the Crusader period, but other argue it was already present in 1009 when the church was destroyed.

New results appear to approve however that the marble slab was put in place under direct orders from Emperor Constantine in mid-fourth century.

During the team’s long restoration, they were able to determine that a large amount of the  burial cave remains enclosed within the shrine walls.

Mortar samples from the southern wall of the cave date back to 335 and 1570, providing evidence for construction works during the Roman period.

Samples taken from the tomb entrance dated back to the 11th century, which is constant with the Edicule reconstruction following the destruction in 1009.

“It is interesting how [these] mortars not only provide evidence for the earliest shrine on the site, but also confirm the historical construction sequence of the Edicule,” said Antonia Moropoulou, NTUA Vice Rector of Academic Affairs.