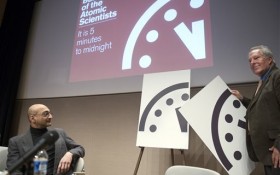 Scientists behind a “Doomsday Clock” that measures the likelihood of a global cataclysm are set to announce Tuesday whether civilization is any closer or farther from disaster.

The Bulletin of the Atomic Scientists is expected to unveil the minute hand on the metaphorical clock in Washington, D.C. The clock reflects how vulnerable the world is to catastrophe from nuclear weapons, climate change and new technologies, according to the bulletin.

The minute hand is assessed each year. It has also previously stayed the same and been adjusted in the opposite direction. Most recently in 2010, bulletin scientists cited nuclear talks between the U.S. and Russia and agreement to limit a rise in global temperature for a change from five minutes-to-midnight to six minutes-to-midnight.

This year’s clock is expected to consider tensions between the United States and Russia and the recent North Korean nuclear test.

The Bulletin of the Atomic Scientists was founded in 1945 by University of Chicago scientists who helped develop the first atomic weapons. The clock was created two years later, with midnight symbolizing apocalypse.

The closest the clock has come to midnight was two minutes away in 1953, when the Soviet Union tested a hydrogen bomb that followed a U.S. hydrogen bomb test.