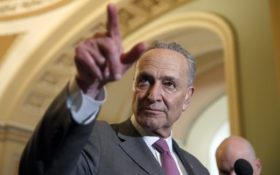 A group of top Democrats is spending big bucks on last-minute advertising aimed at saving New Jersey Sen. Bob Menendez — and leading the pack is none other than Senate Minority Leader Chuck Schumer.

It’s a controversial move by Schumer. Since 2012, Menendez has been repeatedly accused of pedophilia by political opponents.  He was indicted of corruption charges in 2015 but released after a hung jury couldn’t agree on his guilt. He was also “severely admonished” by the Senate Ethics Committee this spring and ordered to repay “gifts” to political donors.

Menendez’s campaign says there’s no evidence any allegation against him is true.

Schumer and the Senate Democrats’ top super PAC will drop $3 million on television advertisements to help Menendez bash his challenger, Bob Hugin a retired pharmaceutical CEO. In the final three-week stretch until the midterm elections, this sudden announcement is signaling that Menendez is struggling — and this could be terrible news for his own party.

The Tuesday announcement was made by the Senate Majority PAC, a group closely connected to Schumer, just a day after Hugin released a new ad implying underage prostitution misconduct by Menendez.

Chris Hayden, a spokesman for the Senate Majority PAC said, “Bob Hugin is a Trump sycophant who is funding his campaign off the millions he made raising prices on cancer drugs as a pharma CEO.”

Hayden also said that the new advertisements will be running in New Jersey, New York, and Philadelphia.

“We thought now is the time to let voters know who Bob Hugin is,” Hayden said. He denied that the sudden advertisements are any sign that Menendez is in trouble.

However, Republicans jumped on the news.

“That’s why they’re making a last ditch effort to try and save Menendez’s disgraceful political career.”

After his ongoing corruption trial, Menendez has seen his approval ratings continue to sink. Recent polls suggest that Menendez is leading with a 2 to 11 percentage point range, but his unfavorable ratings have continued to climb.

As the margin continues to close between Menendez’ lead over Hugin, Democrats are clearly becoming nervous.

New Jersey is slowly becoming the state to win in the midterm elections race, and Democrats are so worried that they are willing to spend a fortune to put Menendez back in office.