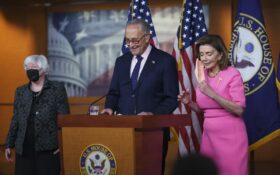 The media have been laser-focusing on this year’s midterm elections since November 4, 2020, but some pundits have taken a longer view.

More and more commentators are looking toward the Senate’s election cycle for 2024… and it looks bad for Senate Majority Leader Chuck Schumer.

The Senate Democrats face an advantage this year due to the length of the Senate terms. Senators serve six-year terms, and representatives serve only two years per term.

In other words, the entire House goes up for re-election every two years. However, only a third of the Senate faces re-election in a given election year. The “Class 1” senators ran in 2018. The Class 2 senators did so in 2020, and Class 3 will do so later this year.

Each class has its own partisan makeup. In this year’s class, only 13 Senate Democrats are up for re-election, compared to 15 Republicans. Plus, six Republicans are retiring, compared to only one Democrat: Vermont’s Patrick Leahy.

Of the 13 Democrats up for re-election this year, most are running in dark blue states. For example, Schumer himself is running for reelection in New York this year.

For that reason, the Democrats may retain control of the Senate after 2022… but they’ll almost certainly lose it after 2024.

23 Senate Democrats go up for re-election in 2024, compared to only 10 Republicans.

Plus, those Democrats tend to represent swing states or red states. For example, Democrat Sherrod Brown is running for reelection in Ohio that year. So is Pennsylvania Democrat Bob Casey.

If there’s a silver lining for Democrats, it’s that their most vulnerable senators already lost re-election in 2018, during Class 1’s last cycle.

“Jon Tester of Montana and Joe Manchin of West Virginia, both… survived the 2018 midterm cycle that evicted four colleagues from red or swing states,” Politico explained. For example, Joe Donnelly of Indiana and Heidi Heitkamp of North Dakota both lost re-election in 2018.

Democrats are hoping that these previous losses will cushion any future losses.

The GOP gained seats in the Senate in 2018, despite the Democrats’ gains in the House. This year’s Senate cycle favors Democrats, but 2018’s election cycle favored the GOP.

In 2018, the Class 1 Democrats benefitted from a blue wave amid a backlash against Trump. Next time, they’ll have to run for re-election on the same ballot as the presidential candidates. Swing-state Democrats may need to overcome harder partisan lines.

Public polling has become unreliable, and nothing is certain.

But the odds are stacked against Schumer and his caucus.