School lets Satanists give books to kids - The Horn News 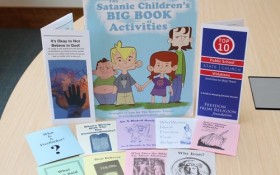 It started with a teacher providing donuts to students at a prayer meeting. And it resulted with a group being invited to hand out Satanic coloring books to middle schoolers.

It sounds too outrageous to be true… but it is.

Atheists provided pamphlets on topics like sex in the Bible, problems with the Ten Commandments and a Satanic activity book to middle and high school students in a rural Colorado district earlier this month, the result of a fight between Delta County schools and critics over whether it should continue to let everyone from Little League organizers to the Gideons distribute literature in schools.

The Freedom from Religion Foundation (FFRF) is behind the literature. The Madison, Wisconsin-based group got involved after learning about a Bible study with a teacher who offered free donuts to students who showed up for the gathering before school. The Daily Sentinel reported that the district recently discontinued the group but the gathering has been revived by students instead.

A woman also complained in December to the Western Colorado Atheists and Freethinkers, which contacted FFRF. The woman was upset about Bibles made available in schools on tables designated for pamphlet and book giveaways, and there were also complaints that students who didn’t take them were bullied, said Anne Landman, founder of Western Colorado Atheists and Freethinkers.

The Freedom from Religion Foundation successfully sued over a similar distribution policy in Orlando, Florida schools. In an effort to also change policy in the Delta County district, the foundation asked for permission to offer the pamphlets, which it calls “non-tracts”, as well as Satanic activity book on the same tables.

In a letter to district superintendent Caryn Gibson, foundation lawyer Andrew Seidel said the group would rather the district just change its policy and stop all groups from distributing literature in schools.

District spokesman Kurt Clay said the policy is not aimed at helping religious proselytizing but allowing the easy distribution of information about outside groups like Little League and the Boy Scouts in small towns where there are no recreation centers and most extracurricular activities are run by volunteers. He said officials are considering changing the policy but that will take some time.

“We’re trying to get the proper material out to kids,” he said.

Clay said the school district did not want to risk a costly lawsuit but also decided that students would not be hurt by the giveaway.