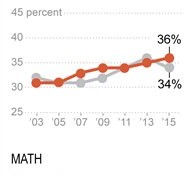 WASHINGTON (AP) — The nation’s schoolkids turned in a lackluster performance on national tests, with math scores for fourth and eighth graders declining for the first time in 25 years. Reading scores were not much better: flat for fourth graders and lower for eighth graders than two years ago.

The 2015 National Assessment of Educational Progress also shows students have a ways to go to demonstrate a solid grasp or mastery of their reading and math skills, with weak levels of proficiency for both grades.

Here are some things to know:

In math, fourth-grade students had an average score of 240 points on a 500-point scale. That’s down one point from 2013. For eighth grade, the average score was 282 points, down 2 points. The drops mark the first declines in math since the test was first administered in 1990.

The District of Columbia and Mississippi notched up some substantial gains. Credit goes to fourth graders.

Fourth-grade math scores in D.C. and Mississippi were up 3 points for each. Reading scores also were higher in fourth grade, with D.C. up 7 points and Mississippi up 6 points.

Another state of note: At the eighth-grade level, reading improved in West Virginia by 3 points. It was the only state with higher scores.

WHAT PEOPLE ARE SAYING

Education Secretary Arne Duncan urged parents, teachers, and others not to panic as states embrace higher academic standards, such as Common Core. “We should expect scores in this period to bounce around some, and I think that ‘implementation dip’ is part of what we’re seeing here,” he said.

Chris Minnich, executive director of the Council of Chief State School Officers, said the “higher academic standards caused the states and teachers and districts to change the way they’re teaching certain things” and cautioned that one year’s worth of data does not make a trend.

American Federation of Teachers President Randi Weingarten said the scores “should give pause to anyone who still wishes to double down on austerity and make competition, scapegoating teachers, closing rather than fixing schools, fear, and testing and sanctioning the dominant education strategies.”

Republican Senate education committee Chairman Lamar Alexander said the disappointing scores “show that the No Child Left Behind federal law and waivers are no longer helping our students improve their performance.”

There were no significant changes in the achievement gap for reading between white students and their black and Hispanic peers.

But for math, there was a small narrowing between white fourth graders and their black peers. The average score for white students was 24 points higher, slightly smaller than the 26-point gap in 2013.