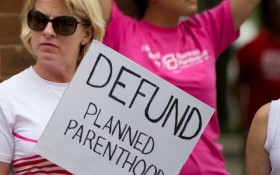 One of Donald Trump’s earliest backers is taking advantage of a law signed by the president to further restrict funding to abortion providers, signing an executive order directing state agencies not to allocate state and federal money to health care providers affiliated in any way with abortion clinics.

In the order signed Thursday, South Carolina Gov. Henry McMaster also directed the state’s Medicaid agency to seek federal permission to exclude abortion clinics from its Medicaid provider network. The governor also told state officials to put together a list “of all qualified women’s health and family planning providers” within a 25-mile radius of abortion clinics excluded from the state’s Medicaid network.

The move goes through a door opened in April by Trump, who signed a law letting states deny certain federal funding to abortion providers including Planned Parenthood. That measure nullified a regulation finalized at the end of President Barack Obama’s administration that explicitly stopped states from denying federal Title X family planning funds to clinics that also provide abortion services.

South Carolina gets about $5.6 million annually in Title X funds that it distributes to health care clinics, none of which are abortion providers, for family planning and treatment for sexually transmitted diseases, according to state officials.

Planned Parenthood, which operates one of South Carolina’s three facilities that perform abortions, did get about $300,000 in combined state and federal Medicaid funding for non-abortion services, like office visits, annual cancer screenings, and contraceptives between 2010 and 2015, according to the testimony from the state Medicaid agency’s director that year.

“This is not over, and we’ll leave no stone unturned to protect our patients’ access to health care,” Dr. Raegan McDonald-Mosley said. “Every person deserves the chance to lead a healthy life, no matter who you are or where you live.”

McMaster was the first statewide elected official to back Trump’s candidacy. The former state attorney general and lieutenant governor was elevated to the state’s top office earlier this year when Trump appointed then-Gov. Nikki Haley to serve as U.N. ambassador.

With the order, McMaster is showing Trump he’s a state-level executive willing to follow his lead on issues such as abortion. It’s also a way for the Republican to try to make inroads with voters next year, and to show them he has the conservative credentials valued by so much of South Carolina’s electorate.

When McMaster wrote to state health officials in June asking the agency to symbolically reaffirm it wouldn’t send any federal grant money to abortion providers, Lt. Gov. Kevin Bryant warned he wouldn’t sign off on a budget request if a single penny went either directly or indirectly to Planned Parenthood.

At the time, Bryant – one of the staunchest abortion foes while serving in the state Legislature – said that no taxpayer money should go to “evil” abortion providers, even if it’s to provide “vitamin C.” Last month, Bryant announced he’ll challenge McMaster for the GOP gubernatorial nomination next year.