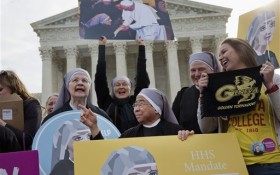 In a new challenge to President Barack Obama’s health care law, the Supreme Court appeared deeply and evenly divided Wednesday over the arrangement devised by the administration to spare faith-based groups from having to pay for birth control for women covered under their health plans.

Ninety minutes of crisp arguments and frequent interruptions by the justices indicated that the court seemed headed for a 4-4 tie that would leave the issue unresolved nationally. Or the court could hold a new round of arguments once a ninth justice is confirmed to take the place of Justice Antonin Scalia, who died last month.

The case could factor into the fight over Obama’s Supreme Court nomination of Judge Merrick Garland. And in its volatile mix of religious liberty and birth control, it also could play a role in the presidential campaign.

If the justices are as firmly split between liberals and conservatives as they signaled Wednesday, the court could say so as early as next week, or wait until the end of June.

Wednesday was the sixth anniversary of President Barack Obama’s health care overhaul; the case in front of the justices is the law’s fourth Supreme Court appearance in five years.

Nationwide, eight appeals courts, including four with decisions being challenged in the current case, have sided with the administration, and one has ruled for the groups. A 4-4 outcome would leave different rules in place in different parts of the country.

In 2014, the justices divided 5-4 with Scalia in the majority to allow some “closely held” businesses with religious objections to refuse to pay for contraceptives for women. That case involved the Hobby Lobby chain of craft stores and other companies that said their rights were being violated under the 1993 Religious Freedom Restoration Act.

Catholic and Protestant colleges, charities and advocacy groups are invoking the same law in asking that the government find a way that does not involve them or their insurers if it wishes to provide birth control to women covered by their health plans.

Among the challengers are Bishop David Zubik, head of the Catholic Diocese in Pittsburgh; the Little Sisters of the Poor, nuns who run more than two dozen nursing homes for impoverished seniors; evangelical and Catholic colleges in Oklahoma, Pennsylvania, Texas and Washington, D.C., and the anti-abortion advocacy group Priests for Life.

Chief Justice John Roberts, who has twice written opinions upholding the law against broad challenges, and Justice Samuel Alito repeatedly challenged Solicitor General Donald Verrilli Jr. on his argument that the policy strikes a balance between religious freedom and access to birth control.

The groups have “used the phrase ‘hijacking,’ and it seems to me that that’s an accurate description of what the government wants to do,” Roberts said.

Alito, who would have struck down the entire law, suggested women affected in this case could get contraceptive coverage on the health care exchanges set up by the law. When Verrilli objected, Alito said, “Is it because these exchanges are so unworkable, even with the help of a navigator?”

Justice Anthony Kennedy, whose vote could give the administration a majority, also sounded sympathetic to the faith-based groups when he said that “religious organization plans here are, in effect, subsidizing the conduct that they deemed immoral.”

Only Justice Clarence Thomas asked no questions, but he has repeatedly sided with the health law’s challengers.

The four liberal justices seemed just as firmly in the administration’s corner.

Justice Sonia Sotomayor said the administration’s arrangement takes into account women who are covered by the affected plans and “have a real need for contraceptives.” Justices Ruth Bader Ginsburg, Stephen Breyer and Elena Kagan also asked questions that signaled their support.

“Sometimes when a religious person who’s not a hermit or a monk is a member of society, he does have to accept all kinds of things that are just terrible for him,” Breyer said.

Contraception is among a range of preventive services that must be provided at no extra charge under the health care law. The administration pointed to research showing that the high cost of some methods of contraception discourages women from using them. A very effective means of birth control, the intrauterine device, can cost up to $1,000.

Houses of worship and other religious institutions whose primary purpose is to spread the faith are exempt from the birth control requirement.

Other faith-affiliated groups that oppose some or all contraception have to tell the government or their insurers that they object, and allow their insurer or third-party administrator to handle everything related to birth control.

Some groups, including Little Sisters of the Poor, contract with church-based insurers, which themselves are exempt from having to provide contraceptives. Verrilli said Wednesday that the Little Sisters probably would not face fines for failing to abide by the administration’s work-around.

The administration contends that tens of thousands of women would be disadvantaged by a ruling for the groups.

The court is weighing whether the accommodation offered by the administration violates the groups’ rights under the religious freedom law. Even if it does, the administration still could show that it has a “compelling interest” in the provision of contraception and that its plan is the most reasonable way.