Say WHAT!? Here's what one desperate GOP candidate just said about Trump - The Horn News 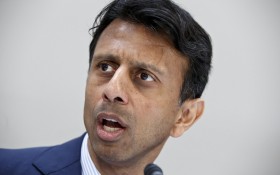 Desperate for attention for his presidential candidacy, Louisiana Gov. Bobby Jindal is on the offensive, calling Donald Trump a “madman.” But he didn’t stop there.

Jindal says the GOP front-runner is “egomaniacal” and a man with “no principles,” who risks costing the party its chance to regain the White House.

Jindal’s words in a speech to the National Press Club in Washington were unsparing, even coming from a candidate who’s held little back when it comes to Trump.

The governor said: “The silly summer season is over. It’s time to get serious about saving our country. It’s time to send Donald Trump back to reality TV.”

He called Trump a “carnival act” and said rivals shouldn’t be “kissing up” to him.

Like some others in the sprawling GOP pack, Jindal has been struggling to gain traction in the race. Low single-digit polling numbers will keep him off the main stage for the September 16 GOP debate.