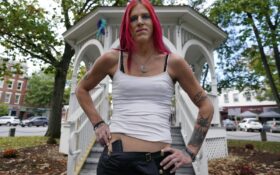 With more than 4,200 votes, Republicans in one New Hampshire county nominated an unconventional candidate for sheriff: a self-described satanist whose campaign slogan disparages the police.

Since then, Aria DiMezzo, a transgender woman in her early 30s, has become a minor celebrity — and the target of online attacks, vandalism including a homophobic slur spray-painted on her car, and a write-in campaign to weaken her chances.

DiMezzo — the lone Republican candidate for Cheshire County sheriff in September’s primary — believes most voters blindly checked the box next to her name. She only registered as a Republican at the last second, after concluding her bid to get on the ballot as a Libertarian — her preferred party — would have required gathering signatures amid the coronavirus pandemic.

“Anyone who takes a look at me knows pretty much right off the bat that I’m clearly not a Republican,” said DiMezzo, who stands over 6 feet tall, sports fire-engine red hair and has tattoos on both arms, including one for the Greek letter “pi” and the word “coexist.”

“I’m just using the party infrastructure to run for office,” she said. “I was 100% upfront about who I am. I never hid any of it. Anyone who bothered to Google me would have found all this stuff about me and they would have seen the anti-cop things that I was posting all over social media.”

DiMezzo, who unsuccessfully ran as a Libertarian in the 2018 sheriff’s race, said she hopes to attract voters on the left and right with campaign promises to support gun rights and limited government and combat police wrongdoing. Among her proposals is to have sheriff’s deputies “pull over police for harassing peaceful citizens.”

If her deputies don’t want to police the police, she said they can either quit or sit in the office and play video games.

“If the police were these fine upstanding honorable people just investigating crimes where there are victims and were serving and protecting people, I wouldn’t have an issue with that. But that is not what they are doing,” said DiMezzo, whose campaign signs include the phrase “F—- The Police” and the symbol for anarchy emblazoned over a sheriff’s badge standing in for the “A” in “Aria.”

QUIZ: Which Liquor Is Better For Your Health? [sponsored]

DiMezzo said, as law enforcement, any of her own of her deputies “would be fired on the spot, and perhaps charged with crimes, for any brutality or misconduct.”

DiMezzo moved to the New Hampshire college town of Keene from Mississippi in 2018 and has garnered attention for her political stances ever since. She also ran unsuccessfully for Keene City Council in 2018 with the slogan “Eat the Rich” and a push to legalize magic mushrooms.

She serves as the high priest of the Reformed Satanic Church, which is run from her home. The church doesn’t believe Satan exists, DiMezzo said, but instead “stands for individualism and voluntarism, and opposes the god of the day” which she described as the state.

Despite hateful online comments and the vandalism, she’s found residents in the college town known as a bastion for bitcoin and Libertarians have mostly welcomed her campaign.

“By and large, the response has been overwhelming positive,” she said. “When I walk down the street, people cheer. They tell me they are going to vote for me. It’s great.”

Since her primary victory, DiMezzo has done a steady stream of interviews — a Russian television crew even came to town — and voters have stopped by the pizza shop where she works to wish her well.

Local Republican leaders have largely remained silent on DiMezzo, and Marilyn Huston, the chair of the Cheshire County Republicans Committee, refused to comment on her campaign.

But Earl Nelson says some Republicans have told him they support his write-in campaign for sheriff. With 40 years in law enforcement and experience as a police chief in five towns, Nelson’s views sharply diverges from DiMezzo’s platform.

“My feeling is that she is making a political statement. Hey, this is America. She can make her statement,” Nelson said. “I’ve been in law enforcement for a long time and I have a lot of respect for the profession in general. To see the signs that say ‘F—- The Police,’ disarm the police, it’s just not appropriate.”

Nelson, 63, has unsuccessfully run four times in the past as the Republican candidate, but said he didn’t seek the nomination this year because he was being treated for cancer. With treatments successful, Nelson said he launched his write-in bid on his own to give voters another choice, and has put up signs around the county.

Rivera, for his part, is confident he’ll win another term.

“I have always embraced a positive campaign and will leave your questions about my opponent and the write-in campaign to be answered by the Republican Party,” Rivera said in an email.

Since her primary victory, DiMezzo’s backers have shifted from treating the race as a protest of sorts to contemplating the possibility that she could stun the establishment — again.

“Does she have a chance? I’m going to say she has a chance,” said DiMezzo’s campaign adviser, Ian Freeman, who hosts a radio show and runs a local Libertarian blog, Free Keene.

“She is not your typical candidate,” he said, “and she is definitely going to draw some votes from some unusual places.”