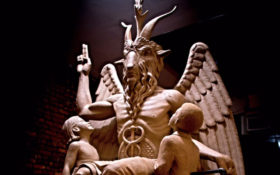 Three teenagers have been arrested as suspects in the brutal murder of an innocent 15-year-old. A case that police sources revealed to likely of been a satanic ritual.

Jessica Valeria was found dead, half-naked, with a wooden broomstick through her right eye in Torreon, Northern Mexico last Saturday, The Sun reported.

Her body was discovered in a garden behind a house in a suburban area of Herta de la Joya. While police reported there was no sign of sexual abuse, Valeria was reportedly dressed only in a shirt.

The three suspects are a group of 17-years-olds, two boys and one girl.

The fatal blow was reportedly, “forceful with violence,” and other marking on her body suggest satanism as a motive.

The scariest part: this isn’t the first satanic act to shock northern Mexico.

A few months prior, three friends were suspected of killing a restaurant worker while allegedly attempting to turn him into a vampire.

In September of 2016, a pit bull was found hanged by a cult.

In fact, one expert warned that devil worship is nothing new in Mexico, and many satanists have a fixation with vampires.