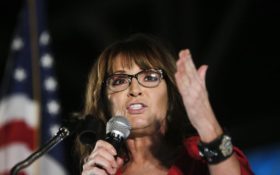 The former Republican vice presidential candidate says she fell victim to British comedian Sacha Baron Cohen during an interview for his upcoming Showtime series, “Who Is America?”

In a Facebook post on Tuesday, the former Alaska governor wrote she and a daughter traveled across the country for what she thought was a legitimate interview with an American veteran, but she says Baron Cohen had “heavily disguised himself” and she had “fallen victim.”

“Yup – we were duped,” Palin wrote on her Facebook page on Tuesday.

In her Facebook post, Palin explained that she was approached by Showtime for a “legit” historical documentary — but she recently found out that the new series is actually a trick to embarrass Republican and Democratic politicians.

Yup – we were duped. Ya’ got me, Sacha. Feel better now? I join a long list of American public personalities who have…

“For my interview, my daughter and I were asked to travel across the country where Cohen (I presume) had heavily disguised himself as a disabled US Veteran, fake wheelchair and all,” Palin wrote.

Palin says she sat through what she called a long interview out of respect for what I was led to believe would be a thoughtful discussion with someone who had served in uniform.” But, she eventually left because she felt the interview was full of “Hollywoodism’s disrespect and sarcasm.”

“Here is my challenge, shallow Sacha boy: go ahead – air the footage. Experience tells us it will be heavily edited, not pretty, and intended to humiliate,” Palin wrote on Facebook.

Her real challenge to the unfunny liberal is to donate all of the proceeds from his show to a charitable group that honors American veterans.

“Mock politicians and innocent public personalities all you want, if that lets you sleep at night, but HOW DARE YOU mock those who have fought and served our country,” she added.

In her Facebook post, Palin reported that Cohen’s team behind the “fake interview” almost prevented her and her daughter from returning to Alaska because they were dropped off at the wrong airport.

“By the way, my daughter thinks you’re a piece of ****, Sacha. Every honorable American Vet should feel the same,” she ended her Facebook post with.