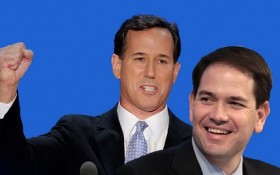 And the speed of Santorum’s endorsement has many political insiders speculating that he and Rubio may have spent the past several days hammering out a backroom deal.

While Santorum never rose above the single digits in the polls, in a crowded GOP field the endorsements of minor candidates have become important. If Santorum can convince his followers to back Rubio, for example, it could help put Rubio over rivals like Texas Sen. Ted Cruz in states where they are running neck-and-neck.

Many minor candidates often stay in presidential races long after its clear they can’t win, specifically because they’re trying to leverage their endorsements. And Santorum’s endorsement is valuable — on the same day he announced he was backing Rubio, fellow Pennsylvanian Sen. Pat Toomey declared he was joining Rubio’s camp as well.

Santorum announced his presidential campaign’s end on Fox News Channel, saying that he had decided, “The best way to do what I set out to do when we announced the run for president … (is) by not furthering our campaign.”

He said Rubio shares his values and “is in a better position to do well in this race.” He described Rubio as a “born leader” and praised his “optimistic” message.

Rubio “is the new generation and someone that can bring this country together,” Santorum said, adding that the 44-year-old senator is “taking the wine I’ve been trying to sell and putting it in new wineskins.”

Santorum may have exceeded his own expectations by scoring a second-place finish in the race for the Republican presidential nomination four years ago before ultimately losing to former Massachusetts Gov. Mitt Romney.

He ultimately won 11 states in the GOP’s 2012 primary election after an unexpected and narrow victory in the opening contest in Iowa, where he emerged as a conservative favorite after touring the state’s 99 counties in a pickup truck.

But he entered a more powerful and diverse 2016 field, causing his campaign to struggle.

He is among the nation’s most prominent social conservatives, having dedicated much of his political career to opposing same-sex marriage and abortion rights, while advocating for conservative Christian family values.

Rubio said Wednesday he looks forward to teaming up with Santorum, telling reporters in New Hampshire that he has “tremendous respect for Rick.”

He added that Santorum “has a message” for “Americans who work hard with their hands every day to make a living and move their families forward.”