Sanders: Yes, I will raise your taxes - The Horn News 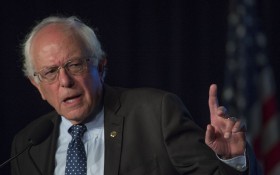 Presidential candidate Bernie Sanders has announced plans for a new tax that’s going to reach into the pocket of every single American.

Sanders, according to a recent interview, thinks it’s high time that America started to look more like Europe.

In order to pay for his ambitious, government-run maternity plan that Sanders says all the European countries already have, he has promised to raise the payroll taxes that every American pays.

That means that, in a Sanders presidency, your paychecks would take a hit almost immediately. And that’s just the first new tax.

“I think if you are looking about guaranteeing paid family and medical leave, which every other major country has so that when a mom gives birth she doesn’t have to go back to work in two weeks. Dad or mom can stay home with the kids. That will require a small increase in the payroll tax,” Sanders admitted in an interview with ABC’s “This Week”.

“That would hit everybody, yeah,” Sanders agreed.