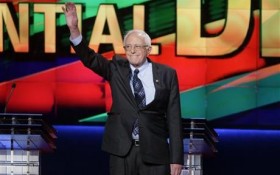 Of course, there are millions of people of all ethic backgrounds living in poverty, and Sanders is facing a backlash for his insensitive — and some say racist — comments.

@CapehartJ @docrocktex26 He knows that ppl of all races are living in poverty, right? He should get out of VT more

If you were puzzled as to why the Black vote is so solidly behind Hillary, Bernie’s commentary on ghettos should provide clarity. #DemDebate

The Census Bureau’s five-year American Community Survey, covering 2007 to 2011, found the white poverty rate was 11.6 percent. In 2013, there was an estimated 18.9 million low-income white people in the United States.