Feeling the Bern? Sanders’ rapper friend gets him in hot water - The Horn News 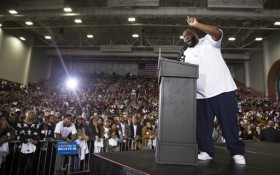 When rapper Killer Mike spoke before Vermont Sen. Bernie Sanders at an Atlanta rally on Tuesday night, he sparked controversy by telling supporters that “a uterus doesn’t qualify you to be president of the United States.”

Killer Mike is the latest Sanders surrogate to use impolitic comments about Hillary Clinton, raising tensions between the two campaigns as they head into pivotal contests in Nevada, South Carolina and a string of “Super Tuesday” states on March 1. It comes weeks after former Secretary of State Madeleine Albright implied at a Clinton rally in New Hampshire there was a “special place in hell” for women who don’t support Clinton, a line that angered some female supporters of Sanders.

The rapper, whose real name is Michael Render, suggested at a rally before 4,800 people at Morehouse College that Clinton would be slow to move on issues of racial justice. His comments referenced a recent conversation he said he had with anti-racism activist Jane Elliott.

“When people tell us, ‘Hold on, wait awhile.’ And that’s what the other Democrat is telling you. ‘Hold on, Black Lives Matter. Just wait awhile.’ ‘Hold on, young people in this country, just wait awhile,'” the rapper said. “But I talked to Jane Elliott a few weeks ago, and Jane said, ‘Michael, a uterus doesn’t qualify you to be president of the United States. You have to be — you have to have policy that’s reflective of social justice.'”

Sanders did not address the comments during the Atlanta rally and it wasn’t clear if the senator heard them — he was off stage at the time. The campaign did not immediately address the remarks.

Clinton campaign spokeswoman Karen Finney responded to the rapper on Twitter, “Based on her uterus? Must be ignoring @HillaryClinton lifetime of doing the work breaking down barriers for all.”

The rapper defended himself on Twitter, citing Albright’s remarks. Albright later wrote in The New York Times that it “was the wrong context and the wrong time to use that line.”

Killer Mike cited a prominent female supporter of Sanders, former Ohio State Sen. Nina Turner, writing on Twitter that “i don’t and never will Hate or think less of woman. Sen. Nina Turner is my Next Great Political Champ but I’m sorry No HRC for me.”

Sanders has vowed to run a positive, issue-based campaign and frequently says he’s never run a negative ad during his congressional career. But some of his top surrogates have made statements at rallies that may have crossed the line.

At an event in Burlington, Iowa, actress Susan Sarandon said she had “gotten a lot of flak as a woman for not just, you know, voting genitalia and going for the women candidate.” She said, “I would love to see a woman president. I believe one day there will be a woman president. But it’s even more important that that woman be the right person.” She added that she was “so disappointed and devastated when Hillary Clinton voted for the (Iraq) war and I was so moved when Bernie Sanders stood in what was an unpopular position and said what he said which unfortunately for all of us came true.”

Cornel West, a Princeton University professor and civil rights activist who has campaigned with Sanders, pointed to Clinton’s ties to Wall Street, telling a Davenport, Iowa, audience that “we will not be led astray by our dear sister Hillary Clinton. We know the difference between a genuine Democrat small D and a Wall Street Democrat capital D.”