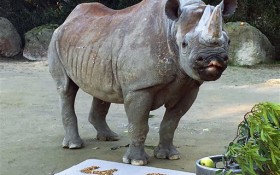 The San Francisco Zoo this weekend celebrated the 45th birthday of the oldest black rhinoceros in North America with a special cake of rolled oats and molasses.

The exact date of Elly’s birth isn’t known, as she was born in the wild. But she has lived at the zoo since April 1974.

Elly has given birth to 14 calves, helping preserve a critically endangered species that numbered 200,000 before 1960 throughout parts of Africa. The number has dwindled to 3,000 to 5,000, due to poaching for their horns, said zoo curator Jim Nappi.

The horns are prized in some cultures for folk medicine cures and use as decorative dagger handles.

In the wild, black rhinos eat bushes and shrubs. At the zoo, they are fed alfalfa and hay, fruit and acacia.

Elly especially loves beets, corn and bananas. She weighs about 2,000 pounds and sleeps on an entire bale of straw to soothe her elderly bones. She shares a habitat with grandson Boone.

“She’s our little old lady that everyone pampers,” Nappi said. “She likes to interact with food. She’s got a kind of independence to her, which is unique.”

Black rhinos are extremely nearsighted but have excellent hearing and sense of smell. Their life span in the wild is about 16 to 20 years.