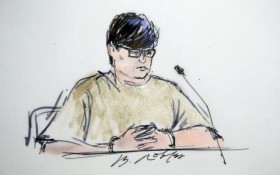 Slaughtering his co-workers wasn’t San Bernardino terrorist Syed Rizwan Farook’s only terror plan. For years he and a friend conspired and mapped out attacks at multiple targets that included a local school, according to authorities.

Enrique Marquez Jr., 24, who bought the assault rifles Farook used in the San Bernardino massacre, was charged Thursday with a terrorism-related charge alleging he plotted earlier attacks at Riverside Community College where he and Farook attended and against commuters on a congested freeway.

The duo, who had become adherents to radicalized Islam ideology as neighbors in Riverside, CA, plotted in 2011 and 2012 to maximize carnage by using pipe bombs and guns to kill innocent people at a campus cafeteria and those stuck in rush hour traffic, court documents said.

Those plans may never have come to light if not for the Dec. 2 attack where Farook and his wife, Tashfeen Malik, used guns Marquez bought years ago to kill 14 people at a holiday meeting of Farook’s health department co-workers.

Marquez was charged with illegally purchasing the rifles that the shooters used again hours later in a gun battle with police. The couple were killed in the shootout.

Four years ago, police said, Marquez and Farook planned to toss pipe bombs into the cafeteria at the community college they attended and then shoot people as they fled.

They also planned to throw pipe bombs on a busy section of a freeway that has no exits, bringing traffic to a halt and then picking off motorists. Marquez would shoot from a nearby hillside, targeting police, as Farook fired at drivers from the road.

As part of the plan, Marquez bought two assault rifles — in November 2011 and February 2012. He said he agreed to buy them because “Farook looked Middle Eastern.”

Authorities previously said Marquez had legally purchased the guns Farook and Malik used. But the charges allege that Marquez lied by signing paperwork that said the guns were for himself or a family member.

Last year, Marquez married the sister of Raheel Farook’s wife. Prosecutors said it was a sham marriage to help the Russian woman obtain U.S. residency. According to the affidavit accompanying the charges, Marquez was paid $200 per month for the union and said his own mother and brother didn’t know about it.